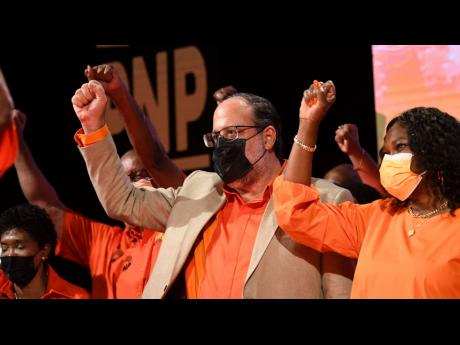 President of the People’s National Party (PNP), Mark Golding, said that a government led by him would pump significant resources into early childhood education to ensure that students transitioning to secondary schools have the required competence in mathematics, English, and critical thinking.

He said that for too long, an apartheid system of education in Jamaica led to a situation where underperforming secondary schools received students from the primary level who were unprepared to transition to secondary education.

“The People’s National Party will make a sustained investment in early childhood development supported by a comprehensive policy to address the broader needs of children from birth onwards,” he said.

Addressing the 83rd annual conference of the PNP on Sunday, Golding said that this policy move would be supported by a sustained programme to raise the standards in all primary schools that were delivering substandard outcomes.

“We must end the educational apartheid in this country once and for all,” Golding said.

Turning to tertiary education, Golding said that the next PNP administration would reconfigure the loan structure of the Students’ Loan Bureau.

He said the plan was to cap monthly payments at 15 per cent of the borrower’s monthly income to ensure that it was manageable for young university graduates.

“The State, and not the student, should bear the risk of employment creation, so we will provide a payment moratorium for students who are seeking work,” the party president said.

He said the PNP would also abolish the requirement of a guarantor to obtain a loan from the SLB.

Golding urged the Government to provide every teacher at the primary and secondary levels with a laptop to carry out their jobs.

He said many of the tablets that were given to teachers long ago had stopped working and were unsuitable for educators, noting that laptops were better for presentations, had more storage space, and could last much longer.

Bemoaning a string of irregularities and improprieties under the current administration, Golding said that the society had grown numb to the recurring scandals.

He argued that the agencies established to enforce the country’s anti-corruption laws were yet to show that they had “what it takes to hold the looters accountable for their thievery”.

The party president said the PNP would be committed to making the anti-corruption laws and institutions in Jamaica work effectively for good governance.

He warned that the systems of accountability should not exist only in theory, adding that Jamaicans must see them working so that they could conclude that the rule of law applied to everyone.

The party leader said that the enforcement of the Disaster Risk Management Act during the pandemic had deepened the “general belief that there are, in reality, two Jamaicas”.

He said that there was one Jamaica for the wealthy, powerful, and politically connected and another for ordinary Jamaicans who faced the full brunt of “these arbitrary and sometimes oppressive laws”.

Golding lamented the stringent fines of up to $200,000 imposed on ordinary Jamaicans for not wearing a mask, while political activists attending a champagne birthday party on a no-movement day faced no legal consequences.

“This kind of differential treatment undermines social cohesion. It breeds cynicism and resentment in the land,” said Golding.

“Our mission is to eliminate the structures of inequality and unfairness that we have inherited from our colonial past.”

Commenting on the minimum wage, Golding said the Government should increase the current $7,000 per week to a livable wage.

He said that the inimum wage should be increased to $12,000, a promise that former finance minister Audley Shaw made a few years ago.

The PNP president also told party supporters online and at the CPTC studio in Kingston that a government led by him would use the Proceeds of Crime Act to impose serious penalties on farm thieves.