Power parents graduate together with distinction 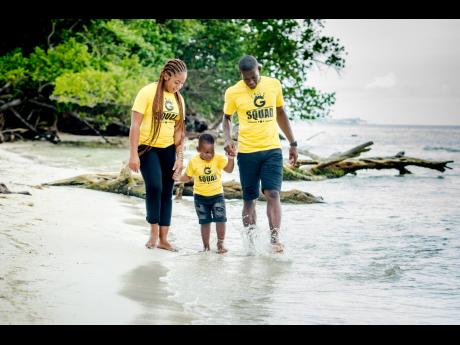 Contributed
Kemar Gayle (left) and Caroney Gregory, who graduated together with Master of Arts degrees with distinction, take a walk at the beach with their four-year-old son Kemarey. 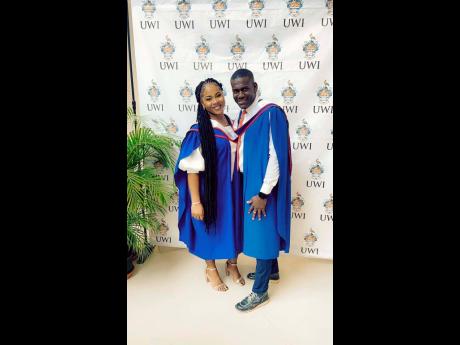 Contributed
Kemar Gayle and Caroney Gregory have a lot in common. They are teachers, share a son, and have graduated with master’s degrees with distinction.
1
2

Kemar Gayle and Caroney Gregory met in college, embarked on parenthood, and recently mastered it together – literally! – with the award of their Master of Arts in teacher education and teacher development, with distinction, from The University of the West Indies (UWI).

Gayle, 31, was a classroom teacher for five years before becoming dean of discipline at Grange Hill High School in Westmoreland just over a year ago.

During his high-school years at Godfrey Stewart, Gayle developed an interest in track and field, but was unable to fully participate because of an injury.

His coach, Hilma Swaby, guided him with gaining enrolment at G.C. Foster College of Physical Education and Sports.

Recalling the many times his mother gave him lunch money with the gentle urging, ‘This is the last I have,” he seized the opportunity with both hands.

Gayle’s ultimate goal was to make his mom proud because of the sacrifices she made, following the death of his father when he was 12.

Twenty-nine-year-old Gregory has been a physical education and sports teacher at Frome Technical High School in Westmoreland for the past six years.

The positive influence she received from her high-school PE teacher and mentor, Tamika Jackson, propelled her to chart a career in the field.

Gayle and Gregory, who share a four-year-old son, Kemarey, commenced their studies in September 2019.

Gayle’s major challenge was that he was studying online and did not own a device.

He started out by using the department’s laptop, but when schools were shuttered in mid-March, to limit the spread of COVID-19, he was in limbo.

“I was very fortunate, as approximately a month after, I was successful in an interview for the position of dean of discipline. The desktop that was present in my office came to my rescue.

“As much as I was able to work from school during the pandemic, I was unable to continue during the nights and early mornings as I would normally do,” he explained.

Though they were enrolled in the same programme, the couple worked separately for group assignments, but supported each other in every other aspect.

“My spouse kept me motivated, and that was a commitment we made to each other. As young as our son was at the time, he exhibited a great level of maturity and understanding towards us,” Gayle told The Gleaner.

“Sometimes he would ask if we have a meeting and promise not to disturb us and in doing so, he would find something to occupy his time,” Gayle said.

Internet connectivity was a challenge for Gregory, who explained that presentations, class sessions, or group discussions were often disrupted.

“The pandemic would have posed major challenges in the collection of research data for my final paper. Nonetheless, with the increased use of technology, I was able to proceed, using online modes of data collection,” she said.

A few highlights of her two-year journey was the opportunity to complete her first research paper in her area of specialisation, physical education and sports, and “ending the race with my partner and equally earning distinctions”.

As the recipient of the Teacher Income Protector (TIP) Friendly Society Award in 2020, she was given the opportunity to address first-year master’s students about coping strategies for online learning during their orientation session.

“My energetic and mature four-year-old son, who is always mimicking his dad and I during presentation preparation, helped to keep me motivated,” Gregory said, adding that she is hopeful that she will earn a scholarship to pursue a PhD.

Meanwhile, Gayle is encouraging young Jamaicans to start whatever programme of study they are interested in, even if they have not fully figured out how it will be financed.

He received scholarships during his tenure at G.C. Foster for his outstanding academic performance, and at The UWI from the TIP Friendly Society.

“I want to be able to give back to the school community where I’m currently employed. I am young, vibrant and energetic, so I’m willing to take on another challenge, to have the ‘Dr’ before Gayle,” he said.