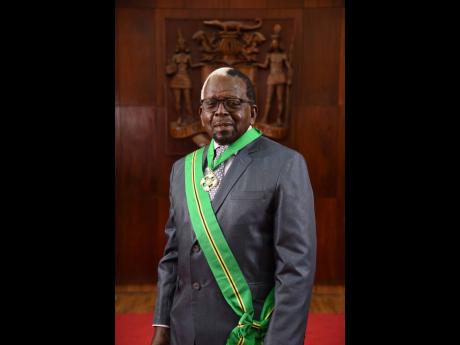 JIS PHOTO
Pearnel Charles Sr was yesterday inducted into the Order of Jamaica.

Phillips, who previously served as a senator and held several Cabinet portfolios under the P.J. Patterson and Portia Simpson Miller administrations, was, along with former House Speaker Pearnel Charles Sr, invested with the Order of Jamaica (OJ), the fourth-highest national award, for distinguished and exemplary public service and distinguished public service, respectively.

The two have committed a combined 87 years to public service.

“I’m very humbled and grateful to the nation for the recognition that is reflected in this award. It is heartening to realise that after a veritable lifetime of public service that there are those who think that the service warrants national recognition,” Phillips told The Gleaner on Monday.

The St Andrew East Central member of parliament said service to the country has been the motivating force of his life.

Charles Sr, who spent over five decades as a politician and trade unionist, was previously invested with the Order of Distinction in the Rank of Commander.

“I appreciate that my colleagues have recognised my work and I feel good about it. I feel that my 55 years of working for the country there’s some appreciation and recognition by those that assess your work,” the former Cabinet minister told The Gleaner, challenging young parliamentarians and trade unionists, in the same breath, to do the work of the people.

The former St Thomas Eastern and Clarendon North Central member of parliament said the trials he faced during his years of service – including imprisonment in 1976, being shot at several times, thrown in a hole and beaten – all led to this moment.

“Those were defeats that I have met, but I’ve never been defeated. I’ve never turned back. As a result of that, I can look back and say I have fought a good fight; I have finished my course and I have done my best. May those who come on see something in me to follow,” he said.

Charles’ successor as Speaker of the House of Representatives, Marisa Dalrymple-Philibert; Minister of Transport and Mining Robert Montague; and Kingston Mayor Senator Delroy Williams were the other political representatives serving in Gordon House to be awarded.

Montague, who was awarded for his contribution to public service and political administration, said that while he was not expecting to be honoured, he appreciates it.

“I feel happy, but I came to serve not to be served. You serve not for awards, but having received it, I’m elated. I accept it on behalf of all the unsung heroes of St Mary who give service every day – especially our front-line health workers, our security forces, teachers and, of course, my bus and taxi operators,” said Montague, who has been in politics since March 1990.

Williams, too, said his work in the capital city is done because of a need to serve and not for rewards.

Williams, a government senator and councillor for the Seivwright Gardens Division in the Kingston and St Andrew Municipal Corporation, was awarded for his contribution to public service in the area of local government.

“It’s always welcomed. I’m feeling very good that what we do is recognised but we continue to work,” he said in a Gleaner interview.

“We continue to work on our homeless persons’ programme and right now we’re looking to provide them with employment. We want to use them as part of efforts to keep downtown clean as we push to position Kingston as a destination city,” he added.

More than 140 persons were honoured this year, including Dr Wayne Henry, chairman and director general of the Planning Institute of Jamaica; Deputy Commissioners of Police Fitz Bailey, Dr Kevin Blake and Richard Stewart.