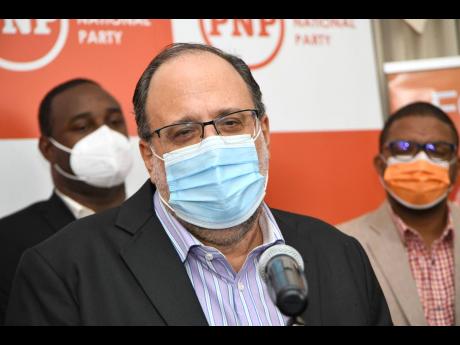 Rudolph Brown/Photographer
Mark Golding, leader of the Opposition and president of the People’s National Party (PNP), speaks to members of the press at a briefing at his West Kings House Road offices in St Andrew yesterday. Looking on are PNP General Secretary Dr Dayton Campbell and newly elected Vice-President Eugene Kelley.

Leader of the Opposition Mark Golding has expressed concern that Jamaica’s leading anti-corruption bodies were failing to hold government officials accountable despite a litany of documented irregularities and impropriety in ministries and agencies.

“It is remarkable that we have gone through six years in which there have been so many documented breaches of propriety and proper governance and we have not had anybody held accountable other than in the case of the Caribbean Maritime University (CMU),” Golding said yesterday during a post People’s National Party (PNP) annual conference press briefing in Kingston.

He signalled that the foremost anti-corruption bodies in Jamaica such as the Major Organised Crime and Anti-Corruption Agency (MOCA), the Financial Investigations Division (FID) and the Integrity Commission had been slow in holding officials who violated the country’s laws accountable.

In 2019, criminal charges were laid against former Education Minister Ruel Reid, his wife Sharen, and their daughter Sharelle, as well as CMU President Fritz Pinnock and Jamaica Labour Party councillor Kim Brown-Lawrence in a multimillion-dollar corruption probe by law-enforcement agencies.

Earlier this year, the Supreme Court granted leave to Reid and Pinnock to go to the Judicial Review Court in a bid to quash a ruling of Senior Parish Judge Chester Crooks in their fraud case.

They are contending that the judge should not have ruled in an earlier matter because of a conflict of interest.

But in his remarks yesterday, Golding argued that “in every other case, we have not heard of any action being taken”.

He contended that the inaction by the anti-corruption agencies of the State had given rise to increased cynicism of political leadership as lingering questions remain about several state bodies mandated to protect the public resources.

He stressed that the seeming inaction was problematic, noting that “we need to look at the reasons why and try to tackle them”.

Last week, Education Minister Fayval Williams heeded a call by the auditor general to call in the police or an anti-corruption agency to probe how $124 million in taxpayers’ money was spent by the Cecil Cornwall-chaired Joint Committee on Tertiary Education (JCTE).

Acting Permanent Secretary Dr Grace McLean, who went on leave to facilitate a probe into the matter, was unable to account for how the money paid by the ministry to JCTE was spent.

In a report on its special probe into the JCTE, the auditor general also recommended that the Ministry of Finance and the Public Service institute surcharge action against Dean-Roy Bernard, the in-limbo permanent secretary in the Ministry of Education, and McLean, on the basis that both officers failed in their fiduciary duty.

To date, there has been no announcement by the FID or MOCA signalling that they are conducting an investigation into the matter.

Williams also said recently that a report by the auditor general into the affairs at the state-run Nutrition Products Limited (NPL) highlights serious breaches of the Public Bodies Management and Accountability Act.

She told journalists at a recent post-Cabinet press briefing that the auditor general’s findings into the operations of NPL might require further investigations by other constituted authorities empowered to take legal action.

The auditor general found, among other things, that payment of $143 million was made to companies and individuals connected to board members and management staff to provide transportation, repairs, maintenance, and other services.

It is not known if the Integrity Commission has launched a probe into any of the reports highlighted as the anti-corruption watchdog has been gagged to keep all matters under investigation secret until a report is tabled in Parliament.

At a parliamentary oversight meeting in 2020, director of investigations at the Integrity Commission, Kevon Stephenson, told lawmakers that the anti-corruption body was probing more than 1,000 cases of alleged acts of corruption in the public sector.