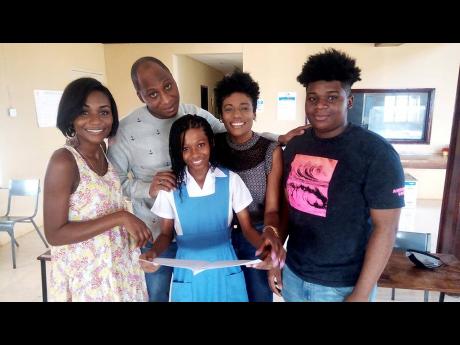 Photo by Hopeton Bucknor
Jada Wright surrounded by her family (from left) aunt Denecia Salmon, father Donovan, mother Judian, and brother Jadan. The family is celebrating her success after the 11-year-old got two grade ones in the Caribbean Secondary Education Certificate exams this year, bumping up her tally to four subjects. 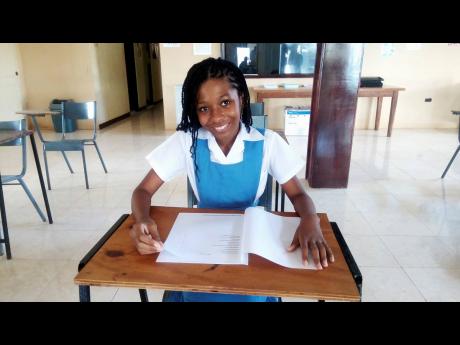 Jada, who lives in Junction, St Elizabeth, and attends Hampton School in Malvern in the parish, nailed the principles of business and English A exams this year following up on her remarkable achievement when she aced social studies and integrated science in 2020 while still attending preparatory school.

The younger of two children for Donovan and Judian Wright has created quite an impact on her family.

“From the very day Jada was born, I knew that she was destined for greatness,” her father told The Gleaner. “I think we have a good father-daughter relationship … . We are very close, and I think she makes all of her family members very proud.”

He described Jada as very loving and caring, with a love for the environment, noting that she is always considered to be the team leader among her peers.

Her latest accomplishment is cause for celebration for Team Wright, as the proud father dubs his family, which started with son Jadan’s conception when he and Judian were final-year university students.

“Seeing her get four subjects was expected because she works very hard and is a goal-driven individual. She is ahead of her time – the way she thinks and the way she reasons. I’m very proud of that,” said Wright.

Mom Judian, who is the founder of the 14-year-old South East College, which has its main campus in Junction, is equally elated.

She revealed that she started the school in 1997 while she was a third-form student at Manchester High. It has now grown into a family venture with three branches.

“We have recently launched a new initiative called Caribbean Online, which has also created an impact on Jada’s learning capabilities and assisted her in achieving her educational goals,” Judian told The Gleaner.

The enterprising wife and mother, who was recognised by the prime minister for her contribution to education with the Nation Builder Award, said that students from as far away as The Netherlands have been enrolled at the school.

A medical technologist by profession, Judian also has a master’s degree in education.

Jada told The Gleaner that with role models like her parents, she has little choice but to be highly motivated to achieve her goals.

“My parents have always been a big motivation for me, and most of all, I always wanted to stand in my mom’s footsteps, being the founder of an educational institution while still going to high school at the age of 14. I think this is a very big accomplishment,” said Jada.

“I am always trying to do all I can to be like her because she is my role model, and she has always been there for me. It’s very nice to have both parents in the education system, especially when you are going to do CXC,” she continued.

Jada admitted to at first being sceptical when her mom suggested that she should tackle some CSEC subjects, “but when I started going to classes and I started to do well, and everything was great, I realised I could accomplish more that I thought I would”.

Juggling day school and the CSEC subjects was a tiring feat, she admitted, as she would be engaged in her regular studies during the day and take on the more advanced studies at nights.

Jada was also full of praise for her aunt, Denecia Salmon, one of her teachers who assisted her.