Give AstraZeneca as second shot for 100,000 awaiting Pfizer – doctor 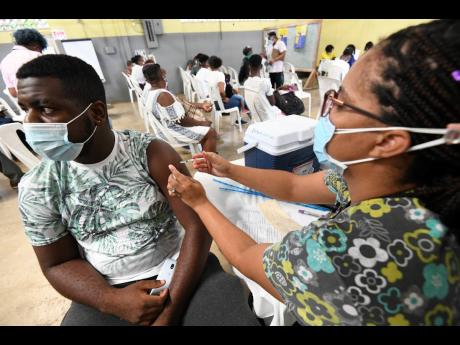 Rallying a call to action in the face of Jamaica’s “vaccine crisis of gargantuan proportions”, public-health specialist Dr Alverston Bailey has urged the Ministry of Health and Wellness to offer AstraZeneca COVID-19 vaccine doses to the estimated...

Rallying a call to action in the face of Jamaica’s “vaccine crisis of gargantuan proportions”, public-health specialist Dr Alverston Bailey has urged the Ministry of Health and Wellness to offer AstraZeneca COVID-19 vaccine doses to the estimated more than 100,000 people awaiting their second Pfizer shot.

Bailey’s advice comes as worrying levels of vaccine hesitancy continue to be a drag on Jamaica’s take-up rate, with approximately 190,000 doses of AstraZeneca due to expire in the next nine days.

But as the October 31 deadline looms large, the United States’ regulators’ formal approval, on Wednesday, of the mixing and matching of COVID-19 vaccines could offer a fillip to the flagging fortunes of Jamaica’s inoculation campaign.

Harking back to the disposal of nearly 60,000 doses of AstraZeneca that expired on September 30, Bailey said that creative methods must be used to save the vaccination programme. The country cannot afford to waste thousands of the life-saving vials, he insisted in a Gleaner interview on Thursday.

“Mixing and matching vaccines has been shown to be safe and effective in studies done in Spain and the United Kingdom and was approved by the FDA on October 20, 2021,” Bailey said, referring to the US Food and Drug Administration.

“Therefore, all those who have received a single dose of the Pfizer vaccine should be offered the AstraZeneca vaccine as a second dose,” he added, citing outgoing German Chancellor Angela Merkel having received Moderna as her second shot of COVID-19 vaccine, having had AstraZeneca as her first.

Bailey, who lectures at the University of Technology, also suggested that the ministry reduce the time frame between doses of AstraZeneca vaccine from eight weeks to six weeks.

Meanwhile, one of Jamaica’s leading epidemiologists, Professor Peter Figueroa, is urging Jamaicans due their second dose of the AstraZeneca vaccine to get it at the earliest possible time.

“We want to avoid wasting any doses of AstraZeneca,” he said of the September 30 dilemma.

Both Figueroa and Bailey explained that vaccines need to be more readily available and suggested that more health centres and general practitioners could assist the ministry in inoculating Jamaicans.

“What is even more important is to move that 19 per cent of people who have gotten one dose of a vaccine to over 50 or 60 per cent as soon as possible,” the epidemiologist said.

Meanwhile, president of the Medical Association of Jamaica (MAJ), Dr Brian James, told The Gleaner that efforts should be redoubled to administer the vaccines that will expire in 10 days.

In countries such as Canada, Italy, and the United Arab Emirates, where supply delays slowed vaccination, they have administered mixed vaccines as a policy. However, James is not yet convinced that the country needs to use that nuclear option.

“I don’t believe that we are at the point where that would be a reasonable position to take. There is the possibility that it might come to that at some stage, but as of now, the WHO (World Health Organization) is not recommending that,” James said.

As at September 15, the health ministry suspended the administration of the Pfizer COVID-19 vaccine because of a shortage. There have been no hard timelines on when the next shipment will arrive.

Figueroa said that for more than 100,000 Jamaicans, it has been six or eight weeks since they received their first dose.

In a press conference last week, Health Minister Dr Christopher Tufton said a shipment of 601,000 doses should arrive in Jamaica within a month.

“If they are anxious or if they work in a job, let’s say they are healthcare workers and they got the Pfizer and now it’s eight weeks and they have to be looking after people with COVID, yes, take a second dose with AstraZeneca,” Figueroa said.

More than 880,000 doses of vaccine have been administered in Jamaica. Approximately 353,000 people – just above 12 per cent of the population – have been fully vaccinated.