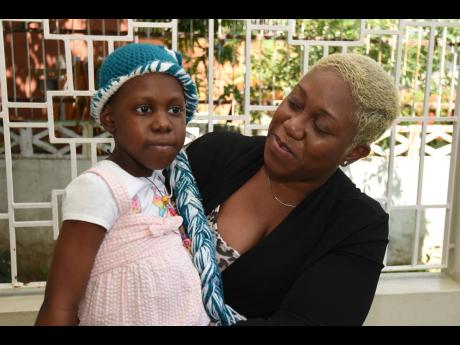 For her sixth birthday celebration on December 10, kidney cancer patient Nyla Simpson hopes to have a mermaid party on the beach.

However, she first needs to keep her chemotherapy treatment on track at some $140,000 per month, which her family is struggling to finance.

Nyla, who was diagnosed in July 2019 with wilms tumour, has started a new 12-month treatment, of which she is now in the fourth month.

At the time of her diagnosis in 2019, the cancer was at stage two. However, because her cancer cells travelled quickly from the original infected area in her left kidney to her lungs, she got a stage-four diagnosis soon after.

“Nyla has been doing treatment for this disease from September 2019 with chemotherapy and she has done a few rounds,” her mother, Shaneel Simpson, told The Gleaner in an interview at their home in Kingston on Thursday.

She had also done radiotherapy in November to December of the year 2019 in an effort to limit the cancer cells in her lungs.

She was given a year’s break from that treatment in 2020 until she started complaining of pain again in June 2021.

“We went to the hospital just to check it out and ensure that she is okay, and that’s where we learnt that the cancer actually got a little worse. The once-microscopic cells are now large legions that were in the lungs, pressing against her blood vessels, and that was causing the pain,” Simpson said.

Nyla had to return to a treatment plan.

“We have 12 months of treatment to go through. We’re now in our fourth month of treatment, and we are hoping that this definitely can get rectified soon ... ,” she said, adding that Nyla is to go down “a more natural nutritional path”.

“Right now, her protocol is that she has to attend hospital every month for one week. It varies based on how she’s doing, so between seven to nine days every single month because of the nature of the medication she is getting. It is very aggressive, so they cannot give her a prolonged time period for the treatment,” shared Simpson.

The treatment is estimated to cost approximately $2 million, depending on the medication prescribed.

The family has already spent more than $1 million on treatment thus far.

Simpson she said it has been a difficult two-year battle witnessing her child suffer with cancer.

“When she was diagnosed, at her young age, she didn’t understand what it was. It was hard to explain to her what it was. She just asked questions – Why is she here? Why is she in the hospital? Why does she have to be stuck with needles all the time? – so it got very overwhelming,” said Simpson. “It’s still overwhelming, but right now, I just have to put my best foot forward as best as possible just to keep myself upbeat and keep her upbeat. She feeds off our energy. We have to keep her focused on healing and to speak healing over her life.”

When Nyla started asking questions constantly in 2019, Simpson knew she had to give up her job as a digital marketer and consultant to answer her questions and give her the attention she needed to survive.

“In the season of her first diagnosis in 2019, I literally had to stop working because I had to be by here side daily at the hospital ... . We have to be with her around the clock just to ensure that she is okay, just to ensure that she is getting the medication, and just for her to be safe,” said Simpson. “So for about a year and a half, I was not working. I was just tending to her. I had to basically just put my career on pause and to be there for her.”

When the COVID-19 pandemic hit and it became mandatory for people to wear masks, it was already the norm for the family.

“She is immunocompromised. We have to always protect her as best as possible, so even before COVID hit, we had to wear a mask when we are around certain people,” Simpson said.

But the pandemic has brought one bright spark for the St Richards Early Childhood School student.

“Because of the onset of the pandemic, the mere fact that it’s now remote, we are blessed with that access. The first year when she was diagnosed, she was not able to go to school and was a year back,” said Simpson although noting that the chemotherapy seems to be affecting Nyla’s ability to focus during classes and recall information.

“We believe that it led to a certain level of brain fog for her, that she can’t remember certain things that she once knew before,” the concerned mom pointed out,

Already, donors from across the world have contributed US$8,000 to Nyla’s GoFundMe account. An additional US$2,000 was raised over the summer, which has helped to fund the new chemotherapy sessions.

Simpson is extremely grateful for the assistance and is hoping that more people will be able to help her to fight to keep Nyla alive.

“It’s with the help of friends and families that we got the necessary help that we needed. We started a GoFundMe for her in 2019 that assisted us in so many ways, but now that it’s back and it’s even more aggressive, the medications cost more, and so we need more financial assistance,” Simpson said.