‘They could have asked for his ID’ 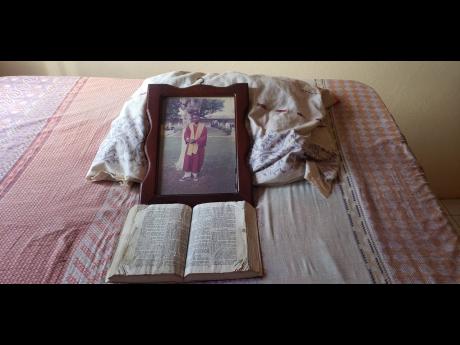 Photo by Shanna Monteith
The family of the late Levi Chambers placed a photo of him by a Bible on his bed.

Forty-two year-old Levi Chambers condemned the separate abductions of two girls in St Thomas last week and expressed a desire for the perpetrator to be brought to justice.

But in a cruel twist of fate, Chambers was attacked and fatally stabbed, having been mistaken for suspected abductor Davian Bryan, who is being sought in relation to the abduction of nine-year-old Phylisa Prussia on Thursday, October 14, and 13-year-old Winshae Barrett on Saturday, October 16, in Bath in the parish.

Chambers, a car detailer, was turned upon on Wednesday after Llandewey residents claimed that he was unknown to them.

“Mi know him innocent. Is not somebody who trouble people,” Leonard Chambers told The Gleaner yesterday as he mourned his brother, adding that he did not resemble the fugitive. “He is a joyful person who didn’t support the abductions at all. We nuh mix up with nothing at all. Mi just cut up over the whole thing. They could have asked for ID or find out where he’s from.”

Leonard dismissed reports that Levi suffered from a mental illness, sharing that the allegations stem from a 15-year-old incident, when his younger brother, who had fallen ill one morning, wandered away from home and was not located until two days later.

Relatives said that Levi, who was later taken to the hospital, did not have another such episode.

“I don’t think that was the case [Wednesday], though. He was all right. I hailed him when I came in Tuesday night and he answered as normal. [Wednesday] morning, I didn’t see him, but I noticed the light in his room on, so I knew he was getting ready for work,” Leonard said.

Equally distraught at the vicious murder is Sydney, father of the Chambers brothers.

Pointing to a sponge on the wall of their verandah, he said, “That is one of his little seats that he usually sits down when he comes in. Tuesday night when him come, he said he didn’t get any lunch and asked me, ‘Yu feed already, Dada?’ And I said, ‘Yes’, and told him I left some food for him because I love to see when they eat.”

Sydney told The Gleaner that it was Leonard who broke the painful news to him.

They are both puzzled as to how Levi, who had left home for work Wednesday morning, ended up in Llandewey, where he met his end.

“The bus driver that picks him up every morning for more than a year now told me that when he was passing where him usually pick him up, he didn’t see him. Him blow his horn and nothing, so he tried calling and didn’t get through. When I went and see him lay down, that hurt bad,” the grieving father said.

“I don’t ask the Father why, because I try not to question Him, but I ask him how comes it come to be that I can be watching the TV and see my son … go down innocently. If mi know him did involve, it wouldn’t so painful, but him not involved,” added Sydney as he cried.

The family, who admitted that they are still unsure of the motive behind Levi’s killing, said that they hope justice will be served to those involved.

Commanding officer of the St Thomas Police, Superintendent Alison Byfield, said that investigations into the stabbing death were ongoing and that the search for Bryan, who is facing charges in neighbouring Portland, continues.

According to her, “We will not relent until he is apprehended.”