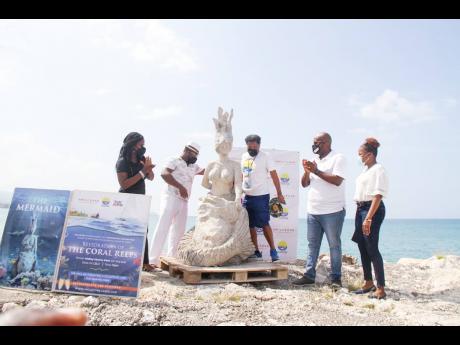 The initiative began with the benevolence of Smileozone Waste Management Company, which donated the first of several mermaid sculptural works to the Montego Bay Marine Park.

Weighing about 500 pounds, the sculpture is made from approximately 80 per cent recycled glass, and cement. The sculpture will be submerged within the boundaries of the marine park.

Laur-Ann Daley, operations manager at Smileozone, said that the recycling of plastic, cardboard, cans, and glass is among the major projects being undertaken by her company geared towards protecting the environment and preventing non-biodegradable items from turning up in the sea and harming coral reefs.

“This sculpture represents the inaugural setting up of an underwater sculpture park right here in Montego Bay, the very first of its kind in Jamaica,” Daley said after symbolically handing over the first sculpture to the Montego Bay Marine Park.

Daley, who also used the occasion to launch her company’s coral reef restoration project, said the sculpture will help to grow the reefs and maintain the livelihood of the fishes.

“As we submerge the sculpture, you will find that the fishes end up feeding off the sculpture, because the algae will eventually grow on it and then, in time, we will submerge additional sculptures, and that’s how the underwater park will be formed,” she explained.

Hugh Shim, executive director of the Montego Bay Marine Park, lauded the partnership with Smileozone to preserve the environment, which he said would further enhance education around a mermaid theme.

“The sculpture should act as a new attraction for snorkellers, divers, and glass-bottomed boat personnel,” Shim said.

He noted that the project is designed to add another layer to the water sports component of the country’s tourism product.

“This will take the strain off some of the popular reefs and dive sites. The project itself is not only for touristic appeal,” Shim added.