After Bath abductions, chief justice reminds no legal hurdle to electronic monitoring of the criminally charged 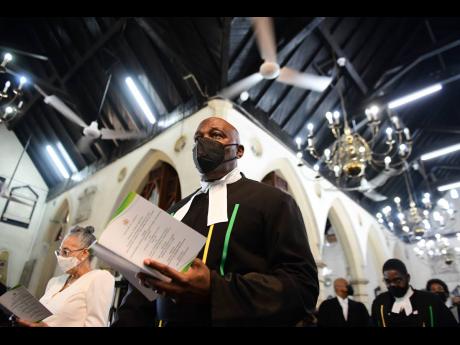 Gladstone Taylor/Multimedia Photo Editor
Chief Justice Bryan Sykes participates in the annual Assize service to mark the opening session of the Michaelmas term of the Home Circuit Court under the theme ‘Upholding Justice with Gratitude, Courage, and Hope’. The service was held at the St Andrew Parish Church in Half-Way Tree on Sunday. 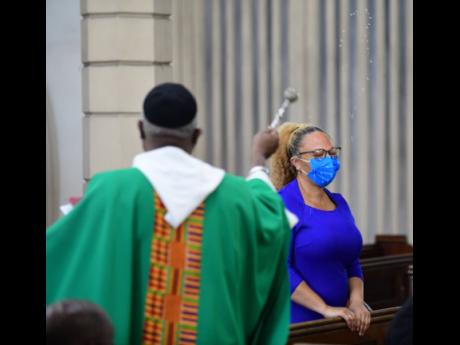 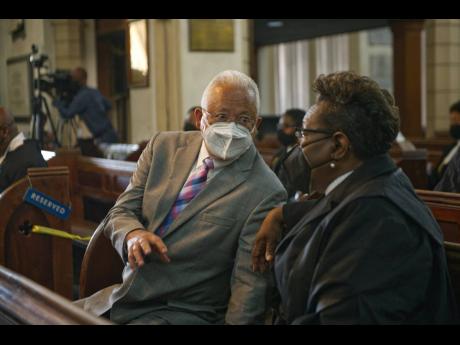 Gladstone Taylor/Multimedia Photo Editor
Minister of Justice Delroy Chuck in dialogue with Director of Public Prosecutions Paula Llewellyn at the annual Assize service at the St Andrew Parish Court marking the opening session of the Michaelmas term of the Home Circuit Court.
1
2
3

Chief Justice Bryan Sykes and Justice Minister Delroy Chuck have reaffirmed that there are no legal hurdles to the usage of electronic tracking in monitoring individuals charged with serious crimes who receive bail. Calls for the widescale use of...

Chief Justice Bryan Sykes and Justice Minister Delroy Chuck have reaffirmed that there are no legal hurdles to the usage of electronic tracking in monitoring individuals charged with serious crimes who receive bail.

Calls for the widescale use of these devices were recently made – including by St Thomas Eastern Member of Parliament Dr Michelle Charles in her State of the Constituency Debate address last Wednesday – in the wake of public outrage over the manhunt for Davian Bryan.

Bryan, who is on rape and firearm charges in Portland, is suspected of abducting two girls in Bath, St Thomas, between October 14 and 16. Both girls were subsequently found, but Bryan remains on the run.

The chief justice was clear on where he stands on the tagging of the criminally charged.

“But you can. There is nothing wrong with electronic tagging to track movements, subject to the Constitution,” he said.

“I don’t know if it is a question of cost, because you would have to get the tags and have a way of monitoring the tags. So you will need the infrastructure for that,” he told The Gleaner after the annual Assize service at St Andrew Parish Church on Sunday, marking the opening session of the Michaelmas term of the Home Circuit Court.

While declining to comment on the specific case involving Bryan, Sykes defended the discretionary right of judges to determine what measures should be imposed to protect individuals from being harmed by persons on bail.

Bryan took up residence in St Thomas because the court had ruled that he not reside in areas that could put the rape victim at risk.

“When persons are on bail, the question is, how do you manage it? If you have tagging, that is one way of managing it. It is up to the judge in the particular case to determine how best to manage it,” Sykes explained.

The chief justice said that the Constitution is grounded on the premise of a presumption of innocence until conviction. He also poured cold water on suggestions of a blanket withholding of bail for some crimes without a case being made of a credible threat.

Minister of Justice Delroy Chuck expressed overwhelming support for the introduction of electronic tracking, as he believes it would enable the security forces to know who is complying with their terms of bail.

These arrangements include equipping the security forces to carry out this function. Chuck said that discussions were being held with an overseas supplier of tracking devices but he was unclear on the success of those talks.

“I know that, for quite some time, the arrangement was being planned. ... So I don’t know if or when, but I can only hope that it will be soon,” Chuck said.

When contacted by The Gleaner, permanent secretary in the Ministry of National Security, Courtney Williams, said that he was not aware if electronic tracking was being considered for implementation.

Weighing in on the vexed issue of bail offers for persons accused of serious offences, Chuck shared that there are a number of cases in which people brought before the court ought not to be given that privilege.

However, he conceded that inefficient preparation of case files by investigators made it “extremely difficult” for judges to deny accused their constitutional right to bail.

“Unfortunately, the police oftentimes charge persons and then, having charged persons, there is a sort of nonchalance to putting the file together quickly. They feel, because the man has been charged and in custody, they can move to the next case, but that is not how it should be,” the justice minister said.

Chuck believes that focus must be placed on ensuring that cases are quickly and properly investigated to guarantee justice.