‘It would have turned into a circus’

DPP explains why Smith case was transferred to Kingston 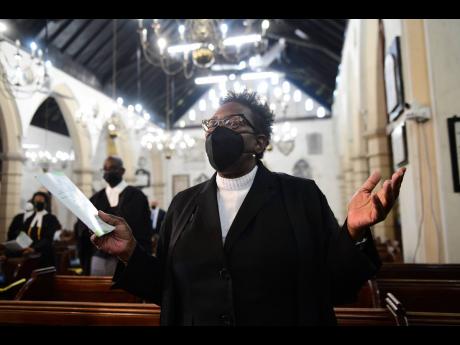 Gladstone Taylor/Multimedia Photo Editor
Director of Public Prosecutions Paula Llewellyn worships during the annual Assize service to mark the opening session of the Michaelmas term of the Home Circuit Court in Kingston. The service took place at the St Andrew Parish Church on Sunday. 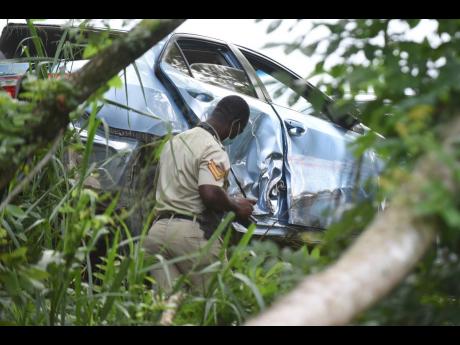 Kenyon Hemans/Photographer
An accident scene investigator examines the wreckage of the vehicle in which Kevin O. Smith and policeman sustained injuries along Church Road, in the vicinity of the Linstead Bypass, on Monday. Both Smith and Constable Orlando Irons succumbed to their injuries.
1
2

Director of Public Prosecutions (DPP) Paula Llewellyn has cited security concerns and the right to a fair trial among the reasons for the transfer of Pastor Kevin O. Smith’s case to Kingston.

A third person was shot dead, reportedly by the police, after he allegedly attacked them.

Smith died in a crash Monday morning en route to Kingston to be charged with two counts of murder, two counts of wounding with intent, and one count of illegal possession of firearm, the country’s chief prosecutor said.

Andre Ruddock, who was detained that same night, is facing the prospect of being charged with one count of murder in relation to the death of Taneka Gardner.

The DPP’s office provided, at the request of the police, a senior prosecutor to give guidance, as investigations progressed.

“It became quite clear to us in consultation with the police that the interest of justice, in terms of fairness of the process to the accused and to the victims, their relatives, and the entire community, would not have been well served if the matter had been allowed to take its natural course,” Llewellyn told The Gleaner on Monday.

Further, Llewellyn said the St James Circuit Court, which commenced on September 16, had completed its four-week stint on October 15 and is on a break until November 22.

The DPP explained that due process also involves the accused being taken before the court in a reasonable time. Her office would have failed, in its duty, if the case were to remain in St James, when there was an avenue provided to move the matter by way of a voluntary bill of indictment.

She said the allegations “shocked the public conscience” and her office decided to invoke the Criminal Justice Administration Act provision, which allows the venue of a trial, once it is an indictable matter, to take place in another parish.

The Kingston and St Andrew Home Circuit Court was deemed the best venue for the trial and the proceedings to follow after the arrest and charge.

Llewellyn said that unlike other parishes, Kingston and St Andrew have the biggest pool of jurors.

“... Given the influence and the breadth of that influence by Dr Smith, it would’ve been very difficult to find jurors who could have been untouched in terms of prejudice, whether for or against Dr Smith, the pastor, or for or against the victims, their relatives, and other church members,” she stressed.

The DPP sought to explain that there were also security concerns surrounding the witnesses as well as the accused.

Llewellyn said the location of the St James Parish Court would have made it very difficult for the security forces to properly man the area.

“Because of the notoriety of the matter, you would have had a lot of onlookers. It really would’ve turned into a circus, which perhaps would have been totally inimical to the integrity and the fairness of the process, as it relates to potential for disruption, potential for persons for and against to vent passion by exercising their freedom of expression, notwithstanding the DRMA,” Llewellyn said, referencing the Disaster Risk Management Act.

The DPP argued that the Home Circuit Court already has added security, as the Clansman Gang trial is under way.

Llewellyn expressed condolence to the family and colleagues of Constable Orlando Irons, who died in the crash, as well as Smith’s family and well-wishers.

“When all is said and done, Dr Smith, notwithstanding the very awful allegations that were against him, was still a citizen of his country entitled to due process,” the Queen’s Counsel remarked.

The avenue pursued in Smith’s case is often used in matters of high public interest such as the two accused who pleaded guilty to the September 12 Clarendon quadruple murder and that of Portland businessman Everton ‘Beachy Stout’ McDonald, who reportedly ordered the murders of his former spouse and wife.