I’m being set up, says man linked with child abductor 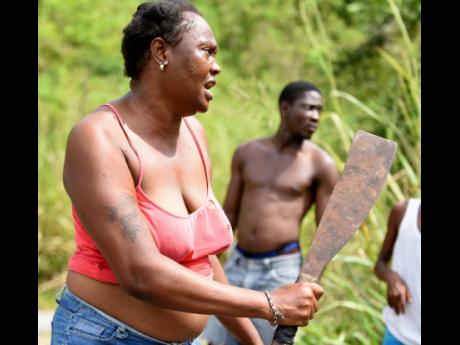 Kenyon Hemans/Photographer
A woman armed with a machete participates in the manhunt for Davian Bryan, the alleged abductor of two children in Bath, St Thomas. The children were rescued but Bryan is still at large.

A St Thomas man who spent three days in custody for questioning and also for his own protection, after it was rumoured that he was an accomplice to suspected child abductor Davian Bryan, wants to clear his name. Tevin Archat, 26, wants an end to...

A St Thomas man who spent three days in custody for questioning and also for his own protection, after it was rumoured that he was an accomplice to suspected child abductor Davian Bryan, wants to clear his name.

Tevin Archat, 26, wants an end to the saga in which he has been accused by persons from his district Arcadia of telling Bryan he needed to have sex with 13 virgins.

“Is like a somebody plan fi set me up. I don’t have any involvement with the child or charged for anything. It spreading that I am the person who tell di boy him must sex 13 virgins before the case can buss,” Archat said.

Bryan is suspected of abducting nine-year-old Phylisa Prussia and 13-year-old Winshae Barrett, who were found after persistent searches from residents and the security forces. Both girls were hospitalised.

The suspect is also on bail for charges of rape and illegal possession of firearm in Portland. He was forced to leave Norwich district because of a court order to preserve the alleged victim’s safety.

Archat said the Bath police investigated him and he was released without charge.

“The police dem tek my phone and run it. They didn’t abuse me, they didn’t take my fingerprints. They just ask me some deep questioning about the girl, and so forth, and the guy that is missing. The youth himself nuh know me,” Archat told The Gleaner.

Archat said that he underwent emotional turmoil during his days-long stay in lock-up.

He disclosed that he was not physically harmed by residents, but his family is concerned because he was verbally abused and some persons brandished machetes.

“The news also circulating is that I am the person who is charging phone for the wanted man and I am supporting him with food, which I am not,” said Archat. “The police dem ask me all dem something deh.”

Archat says he does not have a history of crime and is fearful that he could suffer the fate of 43-year-old Levi Chambers, who was hacked to death by a mob in Llandewey, St Thomas, on October 20.

Archat said that his image has been circulated in the social media sphere and is aware that he could become the victim of misinformation and mischief.

“When me come out of jail, those are all the messages I am hearing about my name, but the police dem say dem only a question me. I went through the process and the police did what they had to do. People since that a put up my picture with fraud news. Dem a tell people say if dem see me, dem must call the police because I am involved with Davian,” he said.

Archat is encouraging the police to continue the manhunt for Bryan and had his own advice for the fugitive.

“That man fi just surrender himself still, you know. Either him just bring in himself or him go stay somewhere weh somebody deh mek police come for him.

“Him nah go walk go no station, so better him just do something weh dem can get to him without people kill him. If people catch him, him a go dead,” said Archat.