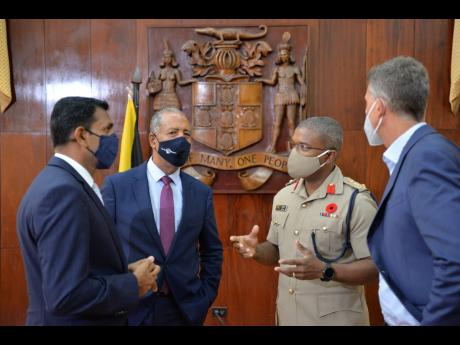 JIS
Professor Gordon Shirley (second left), chairman of the National COVID-19 Vaccination Operationalisation Task Force, engages in discussion with three members of the group that has been tasked with changing the flagging fortunes of Jamaica's inoculation programme. Also in the photo are (from left) Alok Jain, Colonel Markland Lloyd, and Peter Melhado. The task force, in its first press conference on Wednesday, lobbied for the implementation of a vaccine-or-test mandate for public-sector workers.

The National COVID-19 Vaccination Operationalisation Task Force has suggested that the Government implement a vaccinate-or-test mandate for public-sector workers amid concerns over a slow take-up of COVID-19 vaccines across the island.

With roughly 13 per cent of the island being fully jabbed, Jamaica sits at the bottom of the list of Caribbean countries battling the pandemic, with only Haiti having a lower vaccination rate.

With the exception of the Jamaica Defence Force, there continues to be a low vaccination-penetration rate among front-line workers, with fewer than half of public-health nurses being fully vaccinated.

Professor Gordon Shirley, who chairs the task force, cited this as a major problem during a press conference on Wednesday, noting that driving up the vaccination rate among hesitant healthcare workers was a matter of priority.

“We cannot continue to allow them to put their lives on the line and not do the best we can to protect them,” Shirley said.

“We think it’s very important to do so. We think we have lost more public-health nurses and healthcare workers than we ought to. These are persons who have put their lives on the line for the country, and we respect and honour them for having done so, but it would be great if we are also in a position to protect them, to give them the highest level of protection that’s available,” he added.

Shirley noted that the COVID-19 fight could become more difficult as persons from different demographics could also refuse the jab if the nurses who they trust remain hesitant.

He suggested that with the passage of a sufficient period of time to allow for voluntary vaccination, it was now time to consider a vaccinate-or-test programme for the healthcare workers.

This would require them to produce negative results from the pricey PCR tests at regular intervals.

“... Six weeks ago, we felt like the real problem was a supply problem because there was a groundswell of demand that was out there, and we felt if we just got the vaccines, everybody would get vaccinated. Now, we have a relatively good level of vaccination (stock) and the demand, we recognise, is not materialising,” said Shirley,

Recently, the island had to dump nearly 60,000 doses of expired AstraZeneca vaccines procured in April, having reached their expiration date on September 30.

More than 100,000 additional doses are set to expire by this weekend.

“The persons who were willing to come forward have, in fact, largely been vaccinated, and now we’re into those who are hesitant, and the surveys that have been done indicate that up to 65 to 70 per cent of the population is hesitant,” noted Shirley.

Shirley has also suggested that vaccinated Jamaicans be given preferential access to sporting and entertainment events, especially as the Christmas season approaches.

“Christmas is coming, and many Jamaicans look forward to a staff party and a Christmas party. We believe that there are opportunities to allow persons who have been vaccinated to begin to return to a level of normalcy that would be associated with events such as those, and Christmas would be an ideal time to have it done,” he said.

Shirley also pointed to an upcoming World Cup Qualifying match on November 12 at the National Stadium as the right place to test this initiative, suggesting that persons who are fully vaccinated could be allowed access to the venue, while also allowing persons who have not yet taken the jab to do so before entry.