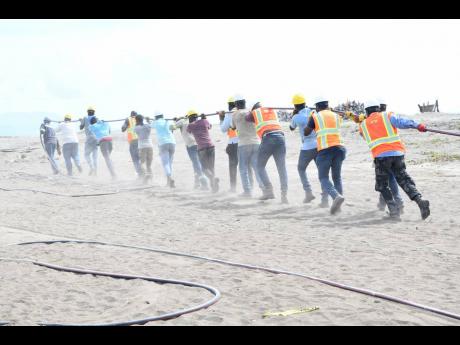 The scowls and furrowed eyebrows said it all.

The steam is rising in Port Royal - but it isn’t from the fish.

Residents of the southern Jamaica seaside village expressed frustration at the Jamaica Public Service Company (JPS) on Sunday at the slow pace of restoration of power after an Airports Authority of Jamaica (AAJ) work crew damaged underground electrical cables that flowed to the town.

The damage was linked to works conducted by the AAJ to protect the Palisadoes shoreline from erosion.

Power outages have dealt a blow to businesses in the town that are still reeling from the COVID-19 pandemic.

“We can’t earn nothing; we can’t play our light bill, which is 30-odd thousand every month and me can’t pay it. Now it make it worse,” said Jennifer Lim, a local business operator who owns a bakery.

Residents said that blackouts were a long-standing source of angst, which caused residents, according to Lim, to “have to wait for hours, sometimes a whole day” for power to be restored.

Since last Tuesday’s outage, the family has had to close their shop ahead of the 8 p.m. national coronavirus curfew as it is simply too expensive to operate a generator to support their home and business.

Shekeva Moncriefe, who operates Shay’s Cook Shop, revealed that she has registered more than $100,000 in losses from chicken spoilage. Other meats have also gone to rot.

Popular seafood restaurant Gloria’s has also been hit by significant losses because of the lack of electricity.

Restaurant manager Tahir Lim-Tom, however, revealed that while “it has been rough on us”, the operators have sought to assist residents who have been hit hard by the outage.

The blackout has also proven unbearable for local fisherfolk.

The outage has made it impossible, he said, for him to store bait to go out to sea because of the absence of ice to store his catch. He estimated losing more than $22,000 worth of bait as it started to rot in his fridge.

Blaine Jarrett, senior vice-president of energy delivery at the JPS, sought to allay concerns on Sunday, saying the company was in the final stages of the project’s completion. After several missed timelines, he declined to give a new deadline.

Jarrett said that the damage caused by the AAJ contractors was extensive as equipment they used became entangled with the power cable exacerbated the damage in multiple locations.

“Our initial attempt on Tuesday and Wednesday was to identify the damage and the defect and to repair them. During that process, we realised that the cable was extensively damaged,” the senior vice-president said.

That prompted the decision to replace one kilometre of subterranean electrical cable. Repairs of that scale, said Jarrett, would take about two months to be effected under normal circumstances.

Delays were also experienced on Friday as the JPS accidentally burst an underground water main, flooding the site. This caused the project to be set back by a day.

However, based on the circumstances, members of his team have been working, in some cases, over 24 hours to replace the wires, said Jarrett.

Additionally, the JPS has also undertaken work to ensure that this challenge does not recur.

Previously, electrical cables were buried three feet under the sand and were frequently damaged during hurricanes.

The new power cables have been encased in pipes surrounded by concrete to mitigate the threat of damage.