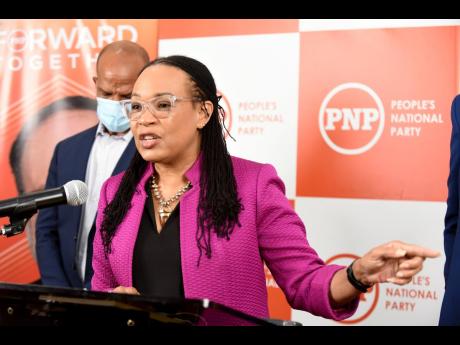 Kenyon Hemans/Photographer
Senator Donna Scott-Mottley addresses a press briefing Tuesday at the Office of the Leader of the Opposition on the imposition of states of emergency in seven police divisions. Also in photograph is Senator Peter Bunting.

If the young men being detained under the states of emergency (SOEs) were children of privilege, the outcry from Jamaican citizens would be so strident that the Government would be forced to immediately revoke them, Opposition Spokesman on National Security Peter Bunting charged on Tuesday.

His criticism came two days after the imposition of SOEs in seven police divisions across Jamaica.

Citing an extract from the ruling by Justice Bertram Morrison that the prolonged detention of five men under states of emergency was unlawful, Bunting said that the country’s poorest would be unfairly targeted by the security measure.

“If two dozen young men, the sons of the leaders of the private sector or the sons of those living in upper St Andrew were detained without charge for one week in this country, we would have no more states of emergency. It would not be tolerated,” Bunting said while addressing a press conference of the Office of the Leader of the Opposition on Tuesday.

Declaring that access to liberty was the most fundamental right guaranteed in the Jamaican Constitution, Bunting, a former minister of national security, emphasised that the law must be respected.

The leader of opposition business in the Senate argued that the Holness administration should declare a state of emergency of social investment in crime-plagued communities instead of police and military deployment.

“The truth is, we cannot escape the fact that there are two Jamaicas,” Bunting said.

Justice Morrison handed down his oral decision in July that the detention of Everton Douglas, Nicholas Heat, Courtney Hall, Courtney Thompson, and Gavin Noble, without charge, was a breach of their constitutional rights.

They were held under SOEs in Kingston Eastern, St Andrew South, Westmoreland, and Clarendon, with some of them detained for more than a year. Habeas corpus applications were filed challenging their detention.

The Government has appealed the ruling.

Meanwhile, Opposition Senator Donna Scott-Mottley, who shadows the justice and gender affairs portfolio, said that in 2018 when SOEs were first declared, more than 3,000 young men were detained and only four per cent of them were charged, many with minor offences.

“We come now to 2021 and we have no guarantees that this will not happen again, because this Government governs in panic mode. So when things seem to reach a crisis in terms of murders, what they do is reach for the only tool that they have, which is the SOE,” she said.

Scott-Mottley said that the democratic foundations on which the Constitution was framed made it very clear that an SOE should only be called under certain circumstances.