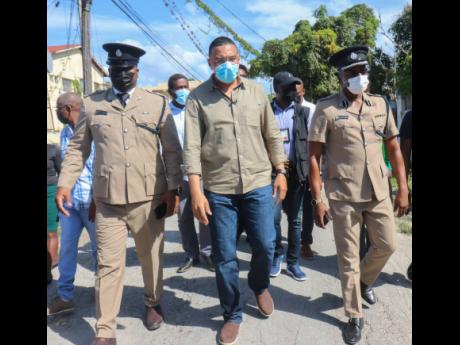 WESTERN BUREAU: Former Police Commissioner Rear Admiral Hardley Lewin believes that the Andrew Holness-led Jamaica Labour Party could reap political benefits from the timing of the states of emergency (SOEs) declared on Sunday as the local...

“I find something peculiar about the timing of the imposition of this SOE. Prime Minister Andrew Holness has developed into an astute politician and strategist, and if my theory is correct, he has made a masterful move,” said Lewin.

“Declare a state of emergency – as he has just done in several police divisions to stem the increase in murders over the same period last year – and hope that the Opposition will take a position to not support their imposition,” the former commissioner reasoned. “Given the Opposition’s lack of support for the SOE, you then paint them as the reason for the high murder rate and why your loved ones are being murdered by these vicious criminals. The governing party then present themselves as the law and order party while the Opposition and their bleeding hearts human-rights groups are in support of the criminals.”

The People’s National Party has not been supportive of SOEs as a long-term crime-fighting tool and has been pressing the Government to come up with a crime plan to address the lawlessness, which has spawned more than 1,200 murders since the start of the year.

Yesterday, Holness declared Westmoreland, which is now under a murderous siege by gangsters, the epicentre of the lawlessness in the island.

The western parish, which has spawned six murders in recent days, was one of seven police divisions placed under a state of emergency (SOE) on Sunday.

Holness toured sections of the parish, including the troubled Dalling Street, Dexter Street, and Ricketts Street areas in Savanna-la-Mar, where gangsters frequently walk around openly with rifles and target rivals even in broad daylight.

“I’m here in Westmoreland because this is now a sort of epicentre,” said Holness in reference to the bloody feud between rival gangs from Dexter Street and Dalling Street, which has spread to other sections of the parish capital.

“The core of that epicentre is the gangs. There are several gangs in the region that appear to be at war with each other. They are brazen. They don’t seem to fear the law, and they seem determined to exact revenge on each other, and in so doing, in a sense, civilians – innocent citizens – are killed,” the prime minister noted.

Without presenting any supporting statistics, Holness said that since the latest declaration of states of emergency, there has been some semblance of a return to law and order in the other divisions.

“We have had a dampening effect right across the island in the divisions and the parishes, except for Westmoreland, where we have a problem that is over and above the capacity of regular policing. We have to invest more resources here, spend more time here to bring that problem under control,” he said.

Responding to concerns by the Westmoreland business community that there is a shortage of police officers in the parish and a call for the parish to be adequately resourced and upgraded to a super police division, Holness said the high level of violence was the main problem.