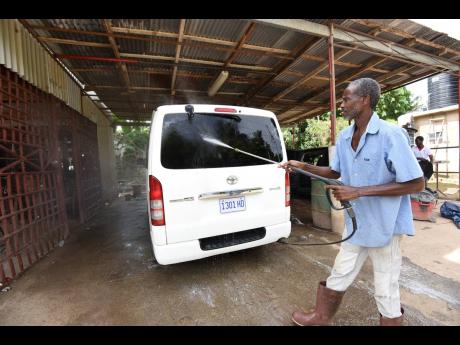 Ian Allen/Photographer
Anthony Williams, a car wash operator in Orangefield, St Catherine, says he has to spend more than $40,000 per month purchasing water to sustain his business. 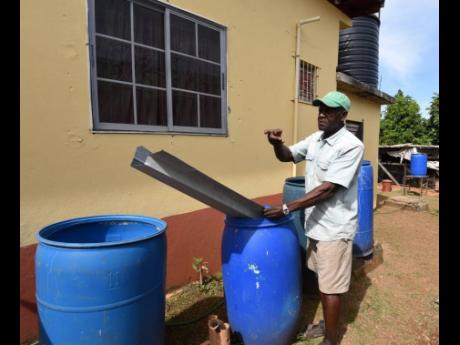 Ian Allen/Photographer
Vidal Bailey explains how he uses roof gutters to direct water into his drums in Orangefield, St Catherine.
1
2

Residents of Orangefield and Orangefield Village in St Catherine took to the streets on Monday, blocking access roads to force the National Water Commission (NWC) to address the supply crisis affecting the adjoining communities for more than a decade.

Despite community meetings and outreach to the NWC, residents said that the problem had worsened.

Anthony Williams, a car wash owner in Orangefield district who relies on a steady supply of water to operate his business, said that the shortage was unbearable.

Williams said that besides rent, staff costs, and chemical inputs, water supply overheads of $21,000 every two weeks were threatening the sustainability of his business.

“It wicked pon we yah. We haffi tek it to the streets because both JLP and PNP nah listen to we. We have four community meetings with them and Water Commission personnel and them tell us that the system soon upgrade,” said Williams, hinting at years of unfulfilled promises.

The JLP is the ruling Jamaica Labour Party and the PNP is the Opposition People’s National Party.

He said that households and businesses were being billed for up to $100,000 dating back to when his grandmother was alive more than a decade ago. However, there has been no water in the pipelines for all that time, said Williams.

Vidal Bailey, a shopkeeper, said he has not seen running water in his pipes for more than a year. He said he’s tired of reports from the NWC of dysfunctional pumps.

“We we were getting a little water now and then, but since the elections we nuh see no water at all. We nuh have no choice but to go out there and block the streets because we woulda like to hear something from someone,” said the 80-year-old shopkeeper, who was born in the community.

The NWC said in a statement that its plans to address water concerns in Orangefield are far advanced.

The company said a new well dug will have the capacity to provide approximately 2.5 million gallons of water per day. Pumps have also been installed to ensure that once the system is operational, the commodity will reach the hilly areas of the community.

According to the NWC, interconnection works have been done to improve the supply. Its teams, the statement said, are now in the final stages of installing and certifying the electrical systems that will facilitate pumping.

Customers have been advised that water supply should improve within the next four weeks, especially in the lower sections of Orangefield.