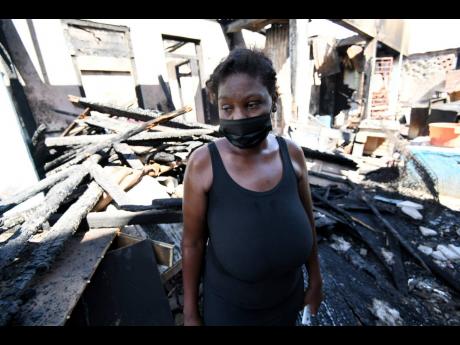 Rudolph Brown/Photographer
Junisha Campbell is a picture of dejection as she stands amid the rubble of a dwelling on Hanover Street, Kingston, that was razed by fire on Tuesday.

An early-morning fire on Tuesday flattened a tenement building along Hanover Street in Kingston, putting a damper on plans for Christmas cheer for some residents, while others have been plunged further into poverty having lost all their possessions.

Some householders were awakened by the shouts of “Fire!” along with the acrid smell of smoke billowing from a section of the building.

Cynthia McKenzie, who has lived there for four years, was one of the few up early because she had a medical appointment that had already been rescheduled after she suffered a stroke.

“I had an appointment at KPH, so I wake up and went to the bathroom. I said to my grandson, ‘Where is my phone?’ because me always sleep with my phone under my pillow,” McKenzie said.

According to her, it was 6 a.m. when she heard popping sounds followed by smoke in a room.

McKenzie, a security guard, raised an alarm that roused other residents.

She attempted to save a refrigerator but could not muscle it out of the way in time. The blaze that engulfed the building destroyed all of her furniture.

Revealing that she managed to save some important documents, McKenzie is thankful but at the same time cursing her luck, as Tuesday’s fire was at least the second one at the residence. The previous fire occurred in 2014.

McKenzie said that her holiday spirits had been dashed.

“Me just nuh want fret pon it (Christmas) true mi have the strokes,” she said

McKenzie is planning to relocate to Linstead where one of her daughters lives, but she has already begun to weigh the distance and looming difficulty because she works in Kingston.

Mother of two, Junisha Campbell, is not as lucky as she said she has nowhere to go.

Campbell is thankful that the life of her daughter, whose bed was positioned against a wall in the room where the fire began, was spared.

“Mi jus’ basically traumatise right now. Don’t know what to do or where to go,” Campbell told The Gleaner.

She got up to use the bathroom and saw the place go up in flames before help could come.

“By time me bawl fire and everybody fi come and help, everything jus’ blow up quickly. Mi couldn’t get fi save nothing,” she said.

Campbell, who is seeking assistance in acquiring property elsewhere, lived at the premises for six years along with her mother and two children.

The residents are unaware of the cause of the fire.

Investigations are under way by the Kingston Central police and the fire department.