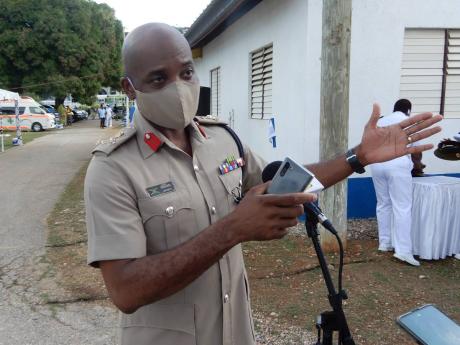 The Jamaica Defence Force (JDF) has been buoyed by the early success of the newly formed Maritime, Air and Cyber Command (MACC) that intercepted a drug run by smugglers off the island’s southwestern coastline, netting cocaine valued at more than J$1 billion.

On Monday night, the MAAC, led by Brigadier Roderick Williams, spearheaded a mission off the coast of St Elizabeth that resulted in the seizure of more than 2,000lb of cocaine and the arrest of three Jamaicans who were found on the vessel. It is one of the largest cocaine seizures made by the security forces.

The JDF, in a statement, confirmed that the MACC intercepted the Jamaica-bound vessel.

“The Maritime, Air and Cyber Command of the Jamaica Defence Force (JDF) is this morning stamping its authority operationally after a collaborative effort was instrumental in intercepting a vessel filled with cocaine destined for Jamaica.

“... The detainees and contraband were handed over to the Jamaica Constabulary Force Narcotics Division for processing and investigations,” the statement said.

Williams said the unit was commissioned into service less than two weeks ago at Discovery Bay in St Ann, and he sees its early success as affirmation.

“It is a remarkable testament to the diligence and bravery of our soldiers. This is a true validation of our work as sailors, airmen, and operational planners in what was a collective effort of the MACC and great proof of concept of the need for growth and transformation in the MACC and the JDF,” said Williams.

The Government will also view the interception as a reward for investment of more than US$92 million in border security since 2017.

When contacted on Tuesday, Superintendent Narda Simms, the police commander for the St Elizabeth Police Division, referred The Gleaner to the narcotics division in Kingston.

Attempts to get a comment from the narcotics division yielded no results.

However, a police source, who asked not to be identified, told The Gleaner that police personnel from Area Three, which includes St Elizabeth, alongside the marine police, played a pivotal role in the operation, albeit it was led by the JDF’s MACC unit.

“It is what you would call a targeted operation, involving multiple agencies, and it went very well,” the police officer said.

“Hopefully, this will serve to deter other would-be smugglers to stay away from the St Elizabeth coastline with their illicit activities.”

Drug smugglers continue to use the island as a key trans-shipment hub because of its nodes of vulnerability, with more than 140 informal ports identified by the police.

In April, a police officer and another man were taken into custody following an operation in Portmore, St Catherine, in which cocaine valued at US$250,000, a go-fast and several guns were seized.

In another operation, also in April, 55kg of cocaine valued at US$2 million was seized at the West Terminal of the Kingston Freeport Terminal.

In September, the narcotics police seized cocaine valued at J$60 million in separate operations in St Mary and St James.