Area Council One denies plot, backers line up in defence 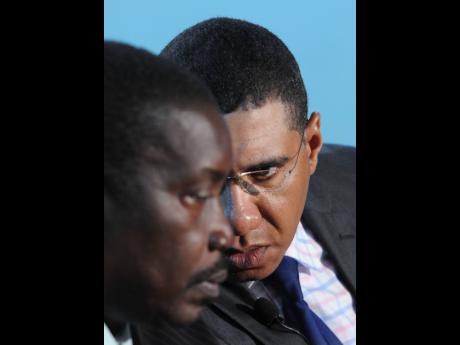 File
Amid the plunging popularity of himself and his party, Prime Minister Andrew Holness has had to intervene to defuse scandals within the oversight of Transport and Mining Minister Robert Montague, chairman of the JLP.

Chairman of the governing Jamaica Labour Party (JLP), Robert Montague, is facing a quiet-but-potent challenge headed by the party’s powerful Area Council One to oust him amid a trail of scandals spanning two ministries he has headed since 2016....

Chairman of the governing Jamaica Labour Party (JLP), Robert Montague, is facing a quiet-but-potent challenge headed by the party’s powerful Area Council One to oust him amid a trail of scandals spanning two ministries he has headed since 2016.

That council covers political representatives from Kingston and St Andrew.

Sources within the party say the move coincides with the push by party leader and Prime Minister Andrew Holness to rehabilitate the JLP’s image because of lost confidence in Montague.

Three names have surfaced as possible replacements for the embattled chairman, with Finance Minister Dr Nigel Clarke emerging as the preferred candidate.

“It’s not the first he has failed to manage his portfolio. Bobby’s problem is that he surrounds himself with people who are on a very loose leash,” said one of several well-placed sources.

“He feels him and his people being attacked now, but is him and them causing all this unwanted attention and calling things down on themselves. Them making the party look bad and then the PM no longer trusts his judgement, so people will move in,” the source added.

However, Winston Ennis, chairman of Area Council One, denied an ouster plot, saying tersely, “I know of no such thing.”

Montague’s transgressions, Gleaner sources said, began with his stewardship as minister of national security between 2016 and 2018 with the unresolved police used-car saga and the Firearm Licensing Authority scandal from which it emerged that persons of questionable character who were previously denied gun licences were eventually approved.

In October, Montague, in his capacity as transport and mining minister, was forced to dissolve the boards of Airports Authority of Jamaica (AAJ) and Norman Manley International Airport in the wake of a Gleaner revelation that the AAJ had made a $450-million stock purchase in the St Lucia-registered firm First Rock.

Clarke later revealed in Parliament that the entities broke the law in their first of two investments because they did not get his ministry’s permission.

On Monday, Montague announced that the majority of the board of the Clarendon Alumina Production had resigned amid growing controversy over a series of contracts given to CCA Capital Partners in recent months.

Another source contacted by The Gleaner confirmed that Montague – who is the member of parliament for St Mary Western and will likely have the backing of the majority of Area Council Two MPs – may have his chairmanship on the chopping blocks. He has been JLP chairman since December 2012.

“Let me just give you it straight. There is a push to move him. They have the support, but nobody has acted on it as yet because of conference and he’s critical to Area Council Two. It’s a very weird set of people in that council,” the source said of Daryl Vaz, James Robertson, Norman Dunn, and Richard Creary. It is believed that that bloc will vigorously resist any challenge to Montague.

Already, Robertson has signalled support for the chairman, insisting that he has given effective oversight to the organs of the JLP.

“He has protected the weak [and] the strong at all times as chairman,” Robertson told The Gleaner on Tuesday.

“He has not done anything that would even make me question my support of him as chairman. He has been excellent at keeping the party modern and democratic.”

Jason James, councillor for the Gayle division in St Mary Western, said he would be using his vote to help return his MP to the chairmanship of the party.

Gayle dismissed suggestions that Montague could be under pressure from sections of his own party, based on the recent controversies.

“I’m backing him fully to return as chairman, 100 per cent,” James told The Gleaner on Tuesday.

James said word on the ground in the constituency has also been supportive of Montague, and there is no concern among his supporters in St Mary.

Efforts to reach the four other councillors in St Mary Western were unsuccessful on Tuesday.

As local government polls loom for the first quarter of 2022, the chairman will lead the party into its first test amid plunging popularity since the heady highs of the September 2020 general election victory.

The JLP’s conference is scheduled for this weekend, with 500 persons expected to be in attendance.

Indications are that Clarke, the finance minister, has little interest in the chairmanship, which requires an appetite for cut-throat politics.

“Nigel not going focus on the politics of the position. He is important to the PM and in his very inner circle but he cannot manage that role. Him is a legislator but people in Area Council One pushing for him,” the source said.

Gordon denies being wooed for the chairmanship.

“I have never spoken to anyone. No one has ever spoken to me. I am a public servant on leave of absence from the party,” he said.

– Carl Gilchrist contributed to this story.