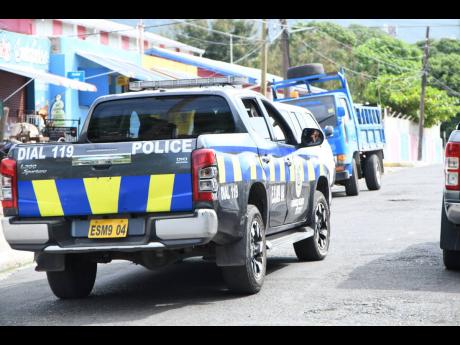 Rudolph Brown/Photographer
Police patrol a section of Franklyn Town on November 13, the first day of new states of emergency in seven police divisions.

A number of commanders have said that since the Government imposed states of emergency (SOEs) in seven police divisions two Sundays ago, more residents have been feeding them with information as the gangsters flee the space.

The disclosure was made on Wednesday at a Jamaica Constabulary Force (JCF) Stakeholders Forum, dubbed ‘Policing in a Pandemic of Violence’, as part of activities to mark Police Week 2021.

The police sought to build their case for the efficacy of the SOEs as the Senate meets today to debate the extension of the security measure beyond its initial 14-day period. After garnering the votes by sheer might of government numbers in the Lower House, at least one opposition member must vote with 13 counterpart senators to ratify the bid.

But the overall landscape shows no improvement, with nationwide murders now trending 11 per cent higher year-on-year.

Superintendent Maldria Jones-Williams – who heads the turbulent Kingston Central Police Division, which recorded a 48.8 per cent increase in homicides up to November 20 when compared to the corresponding period in 2020 – said that there had been no murder in the division since the security measure was imposed on November 14.

The last murder in Kingston Central, which had 64 homicides between January 1 and November 20, saw 75-year-old Vassel Gay being killed on Love Lane on November 13.

“The last 10 days we have not had a murder. We have ramped up our operational activities. We have started more community engagement. The residents are more willing to speak to us now since many of the gang members are out of the space,” she said.

Jones-Williams added that although several gangsters have fled the area since the SOE was declared, the police are actively tracking them down.

Superintendent Damion Manderson, head of the St Andrew South division, said that investigators under his command were also getting more information since the SOE was imposed, noting that even though some of the suspected criminals had also been displaced, the situation had not resulted in an upsurge in violence in the areas surrounding their new hideouts.

“You find that when criminal gang members are displaced form their comfort zone, where they had support in terms of firepower and personnel around them, they tend to go to places where they have to keep quiet because it’s not their playground,” Manderson said.

He noted that the police intend to build on the improved relationship it is now enjoying with the communities.

“The fear factor is normally overlooked by many. You find that when these individuals are in detention or arrested or displaced elsewhere, it opens [up] the community to breathe … . You find that much more statements can be collected; people are willing to speak to us. People are more willing to partner with us,” said Manderson, whose St Andrew South is the most murderous police division in 2021 with 121 homicides up to last Saturday, a year-on-year increase of 17.1 per cent.

Without disclosing figures, he said that a number of persons believed to be criminals, including murder suspects, have been detained in the division since the SOE was imposed and citizens have been assisting in pointing out suspects on identification parades.

Senior Superintendent Vernon Ellis, whose troubled St James division has seen a 36.3 per cent year-on-year increase with 139 homicides up to last Saturday, also hailed the SOE.

“It is even more effective when it is applied with a long-term basis,” Ellis said, whose division had been under an SOE from January 2018 to August 2020, when it was suspended ahead of the general election.

Ellis said that there had also been a noticeable improvement in police-citizen relations since the latest declaration.

“Persons just decided that we have had enough of this. We saw where we are able to create better networks during this process. The recovery of weapons is very consistent with the community-based initiative that we are having,” Ellis said.

Opposition Spokesman on National Security Peter Bunting is urging the Government to abandon the use of SOEs as a routine crime-fighting measure.

The police have recorded 1,288 murders between January 1 and November 20, an increase of 128 or 11 per cent, when compared to the corresponding period last year.