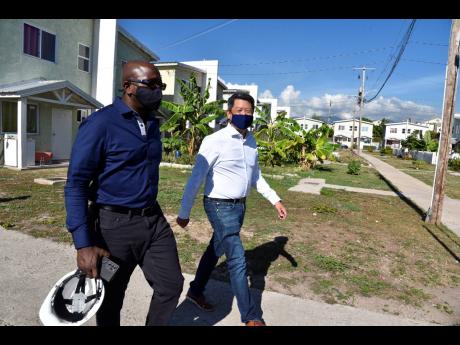 The developers of a Corporate Area housing project have been forced to invest heavily in beefing up security with children being among thieves targeting the development, making off with windows and doors. William Lai, president and CEO of World...

The developers of a Corporate Area housing project have been forced to invest heavily in beefing up security with children being among thieves targeting the development, making off with windows and doors.

William Lai, president and CEO of World Home Jamaica Limited, made the disclosure last Friday during a tour of his Foreshore Estate project and other developments in the Corporate Area by Housing Minister Pearnel Charles Jr and officials of the Real Estate Board.

Lai said that security was emerging a major cost to development, adding that steps have been taken to liaise with the police and involve the citizenry in the works to have them support the project.

Charles applauded the developers for their willingness to take the risk to invest millions of dollars in the area.

He said that officials from his ministry would be convening a meeting soon to get an opportunity to hear first-hand some of the issues and challenges that they have gone through.

“Our goal is to listen so that we can either remedy, explain and ultimately improve the processes by breaking down the bureaucracy, breaking down the barriers while maintaining the accountability and transparency that is needed in the process of developing affordable housing for all Jamaicans across this beloved country,” he said.

The development is surrounded by several volatile communities, some of which homeowners have to traverse to access the current phases.

“If we are going to transition our country from the chaos that we see sometimes to order towards the kind of developed status that we deserve, we are going to have to start building this kind of planned sustainable community in places that are known usually for nefarious things,” Charles noted.

Lai noted that he has also received complaints regarding noise and explosions from neighbouring communities.

“There have been complaints to surrounding areas where there have been some violence that was addressed with the MP (member of parliament) locally. That is my understanding; it has been addressed. But that is a challenge anywhere you go anywhere in the world,” he said.

Charles, who is also minister of urban renewal, acknowledged that the Government could not develop urban communities alone and depended on private developers to also play a role.

Andrew James, chairman of the Real Estate Board, said that he was happy with the development, citing a great demand for low-income housing.

“We designed the buildings very efficiently, where they are compact but also very spacious, airy and light, and so it’s the design, selection of materials and also trying to keep cost under control,” Lai said of Foreshore Estate.

He credited the National Housing Trust (NHT) for facilitating an interim loan agreement with favourable financing for the project.

There are 46 purchasers that are currently living on the 16-acre property.

Phase One, which consists of 48 units, is complete.

Lai said that in another four months, Phase Two of the project would be completed and 30 homeowners presented with titles.

The buildout of the remaining four phases will begin for the completion of a total 230 units.