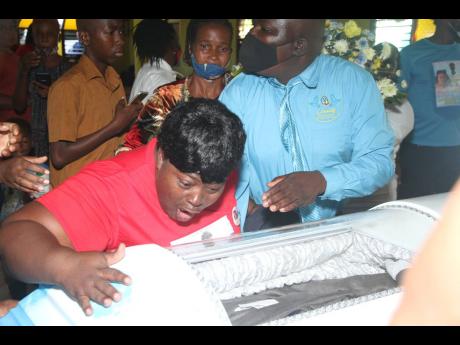 Nathaniel Stewart/Photographer
Natoya Whyte is overcome with grief as she looks at the body of her slain son, Luke Newman, during the funeral service three relatives at the Dynamic Church of God in Havannah Heights, Clarendon, yesterday. Newman and his aunts Tashana Whyte and Sherona Whyte were buried yesterday. The three were among victims of a quadruple murder in the Clarendon community in September. 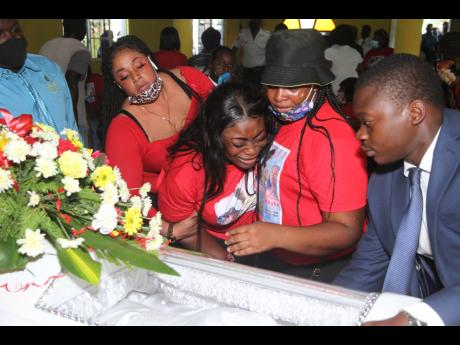 Nathaniel Stewart/Photographer
Tanesha Whyte is consoled by friends and relatives at the funeral service for three of the victims of the September 12 quadruple murder in Havannah Heights, Clarendon. Her sisters, Tashana Whyte and Sherona Whyte (25), and their nephew, Luke Newman, were buried on Thursday.
1
2

Ear-piercing screams from mourners echoed in Havannah Heights, Clarendon, on Thursday as the bodies of three victims of the September 12 quadruple murder arrived at the Dynamic Church of God in the community.

The sight of the two red and white coffins bearing the bodies of 32-year-old Tashana Whyte and her 25-year-old sister Sherona Whyte and a blue coffin with the remains of their 19-year-old nephew Luke Newman was testament to a grief too heavy for one family to bear.

A look of despondence stained the face of the couple’s only child – an eight-year-old boy, who was dressed in a red shirt bearing images of his parents.

Overcome with grief, an inconsolable Natoya Whyte, Newman’s mother and older sibling to the Whyte sisters, fainted during the service as mourners gathered under a cloud of grief still struggling to make sense of the tragic loss of three members of the close-knit family.

Tashana, a mother of four, including a two-year-old, was eulogised as sociable and friendly.

“Tashana don’t make anything bother her. When Tashana cook, anybody can just go and take out food and she didn’t even care if she get any of the food,” brother-in-law Everton Beccon recalled.

As her body was to be interred, her young son asked to see his mother for a final time, triggering another round of tears among the mourners.

Sherona, a visual arts enthusiast, was remembered for her undying love for her son, whom she called ‘Papa’.

“Sherona would always say, ‘Not even work me nah go work until Papa get big because me nuh want nobody ill-treat him. When Sherona leave Papa go May Pen, she call all a hundred times to check up on him,” Williams continued during her reflection.

Relatives said Sherona and her spouse, Michael, were the epitome of true love and praised them for being good parents to their now-orphaned son.

The family said they also lost a gem in Foga Road High School alumnus and football lover, Luke Newman, who was remembered for his humble demeanour.

“Humility was his strongest trait. He was never one to fuss or argue. Whatever you gave him, he would gracefully accept it,” said Janice Williams.

Affectionately called ‘Lukie’, she recalled that he spent most of his days in the kitchen perfecting his culinary skills.

Yesterday, the service took place under the watchful eyes of members of the Jamaica Constabulary Force and the Jamaica Defence Force.

The trio was buried in conjoined graves in the rural community of Wood Hall in the parish.

The September 12 quadruple murder had rocked the Havannah Heights community after men invaded the family’s house minutes after midnight and shot dead the four relatives.

Six men have since been charged with the execution-style killings.