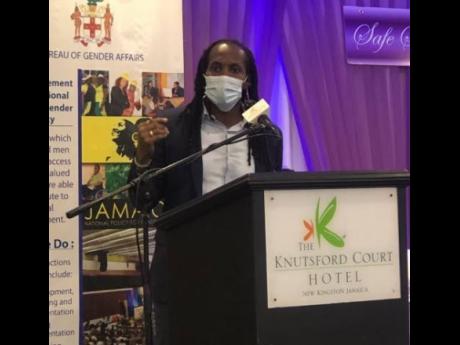 Photo by Asha Wilks
Alando Terrelonge, state minister in the Ministry of Culture, Entertainment, Gender and Sports, addressing yesterday’s public forum on the elimination of violence against women at the Knutsford Court Hotel in New Kingston.

Gender State Minister Alando Terrelonge yesterday called for more men to join efforts to eliminate violence against women in the society and be willing to participate in discussions about women’s protection.

He lamented that toxic masculinity “robs women of their dignity and their very humanity and reduces them to chattel”.

Addressing a public forum at The Knutsford Court Hotel to mark International Day for the Elimination of Violence Against Women, Terrelonge said that there was still a long way to go in ensuring the safety of women as he paid tribute to those who have been slain.

“Every space in Jamaica ... must be transformed into a safe space,” he added, a nod to this year’s national theme, ‘Safer Spaces for Women and Girls’, which also emphasises the importance of also establishing policies, legislation, infrastructure, and programmes that support safer spaces for all women and girls.

Among places to be transformed, said Terrelonge, were homes, the workplace, the Church, and even the sidewalks and community paths along which women travel.

He said that toxic masculinity promotes the idea that males have complete authority over women and can do whatever they want with them, and, as such, should be spurned.

“We must do something different,” the junior minister said in a call for the Bureau of Gender Affairs to collaborate with the Ministry of Education to ensure that “at 12 years old, from the minute they enter into first form, there is a special programme designed to teach our young boys about respecting the women around them, the little girls in their class, their teachers [and] their mothers”.

Lloyd Edwards, a father of four – two of whom are females, aged 24 and four months – told The Gleaner on Thursday that he is wishing for the society to do more to make girls and women safer, noting his concern at the rate at which they are being abused, abducted, and sometimes raped and killed.

Recalling the double abduction of two young girls in Bath, St Thomas, in October, Edwards said, “A few nights ago, I had her (his young daughter) in my hands and I start thinking, ‘If I should pass off now, what would become [of her]?”

Having grown up without a father, Edwards said that other relatives and persons around him helped to bridge the gap.

As such, he called for a return to old village traditions of everyone looking after the children, noting that many of today’s youth lack of love and compassion.

Veron Blake told The Gleaner that he was disturbed by the state of society and the frequent reports of domestic violence.

He echoed Terrelonge’s call for that boys to be taught from an early age how to effectively socialise, especially those without a father figure in the household or positive male role model to teach them how to respect women.

“It would be good to have a programme for the young men in school so them can understand, so when them grow up, them don’t become an abusive man,” said Blake.

International Day for the Elimination of Violence Against Women kicks off the 16 days of activism against gender-based violence, which ends on December 10. The aim is to create awareness of all forms of violence against women and girls and its impact on the country’s socio-economic development, and also commemorate those who have experienced violence.