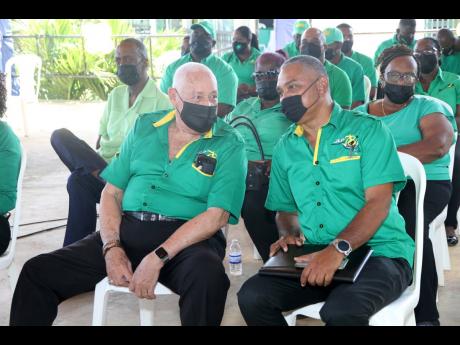 The Holness administration’s investment in the health sector has been hailed as a key plank of its development plan in central Jamaica.

Michael Stern, deputy leader-elect of Area Council Three, said that construction of two modern clinics in May Pen and a new block at the parish capital’s hospital was testament to the commitment to improving service in the Southern Regional Health Authority.

Plans are also in place to ramp up services at health centres in St Ann and Manchester, which also fall within the radius of Area Council Three.

Referencing the new Omicron variant of the coronavirus, Stern said the mandate is to equip the community centres to deal with emerging health crises.

“We don’t know if this is going to be an annual occurrence. So the main thing that the Government has to do is to prepare the health sector to deal with these things at the community level and not just at the hospital level. So we are investing,” Stern told The Gleaner at the Denbigh Agricultural Showground, one of 10 satellite locations that hosted the Jamaica Labour Party’s (JLP) 78th annual conference. The staging was held at several sites because of COVID-19 gathering restrictions.

Stern also hailed the renovation of the Chapelton Hospital, which is expected to reopen in June 2022. Much of that investment is credited to the philanthropy of Beverly Nichols, a Clarendon native now living in the United States. She donated US$1 million to the rehabilitation effort in 2018.

“We already started a first phase at the Chapelton Hospital that people were complaining about and blocking road in the past. We have finished the first phase and we are doing the second phase now, which has just been approved by Cabinet, and the work will start in another few days at Chapelton to finish up that hospital so that people can start using it again,” said Stern.

Services at Chapelton Hospital were relocated to the Summerfield Community Centre in April 2019.