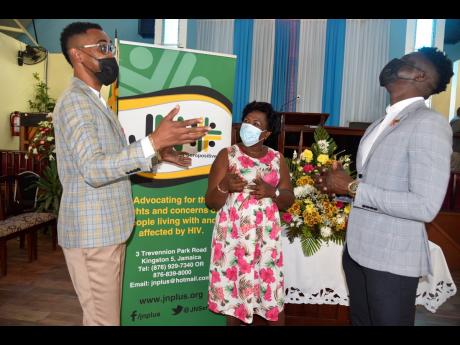 Nicholas Nunes/Photographer
Deacon Joseph McIntyre (left) of Boulevard Baptist Church engages in conversation with 60-year-old activist and mother Joan Stephen, who has been living with HIV for more than two decades, and Jumoke Patrick, executive director of the Jamaica Network of Seropositives, Jumoke Patrick, during a service held in commemoration of World AIDS Day, which will be marked on Wednesday, December 1. The service was held at Boulevard Baptist Church in Kingston on Sunday.

“Nobody went out there and picked HIV off a shelf.”

That pithy and profound message by Joseph McIntyre, deacon of Boulevard Baptist Church in St Andrew, served as a rallying cry on Sunday for Jamaicans to end discrimination against people with HIV/AIDS.

McIntyre, speaking to The Gleaner on the sidelines of the church service in the lead-up to the December 1 commemoration of World AIDS Day, inveighed against rhetoric that HIV/AIDS was a plague from God, a view that was once widely promulgated by some Christians.

Instead, McIntyre asserts that his church, in particular, is very open, fostering solidarity and reconciliation for those dealing with any illness, disease, or disability.

“Our mantra is in the Bible, so we should show care, love, compassion the Jesus way,” he said of Boulevard Baptist, which has a membership of 1,200.

He reinforced the call made by Jumoke Patrick, executive director of the Jamaica Network of Seropositives (JN+), for the church and other organisations to help raise awareness and promote education.

Patrick said, however, that the country has made significant improvements in treatment and care in the fight to eliminate the stigma and discrimination people with HIV/AIDS have had to endure.

Developments in antiretroviral treament have led to a simplified treatment regimen for people with the disease. Jamaica now has close to 50 treatment sites islandwide offering free antiretroviral medication.

However, discrimination remains a major barrier to access to healthcare in Jamaica, particularly in rural areas, said Patrick.

“We need to ensure that we tighten those policies and laws that protect people living with HIV when they are being discriminated against,” he said.

Patrick also urged those with the disease not to hide their status, emphasising the importance of seeking medical help early and living a healthy lifestyle.

The JN+ executive director reported a decrease in HIV/AIDS infections in Jamaica last year, with approximately 600 people being recorded, compared to more than 1,000 annually in previous years.

“We are hoping that this trajectory continues ... because, for us, it means that we would be stepping up our programmatic responses in getting people on treatment [and] preventing people from contracting HIV,” he said.