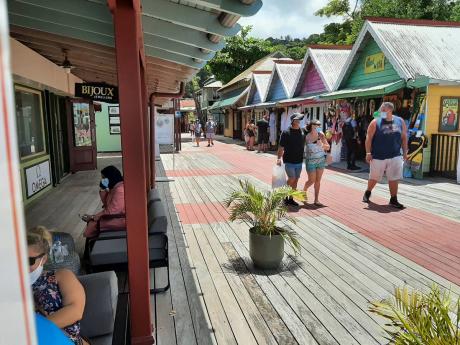 File
Tourists from the Carnival Sunrise cruise ship shopping at Island Village in Ocho Rios, St Ann. The cruise ship industry capsized under the weight of travel restrictions in 2020 and Jamaican tourism officials are waiting with bated breath on the repercussions from the emergence of the Omicron variant.

WESTERN BUREAU: As countries have rolled down the shutters on travel to several southern African countries to buy time to stave off the Omicron coronavirus variant, Jamaica’s Tourism Minister Edmund Bartlett says that the scale of the impact here...

As countries have rolled down the shutters on travel to several southern African countries to buy time to stave off the Omicron coronavirus variant, Jamaica’s Tourism Minister Edmund Bartlett says that the scale of the impact here would largely depend on the reaction of its main source markets, the United States, Canada, and the United Kingdom.

No restrictions have been placed on any of the European countries where the variant has also been found, but Bartlett is keeping a keen eye on market responses which may be fluid and fast.

“I think that we are going to continue to appreciate the effort to manage this whole virus by iteration. And each iteration will come with its own challenges, but also its own opportunities. And, as a destination, Jamaica’s eyes are always on the opportunities,” Bartlett said on Sunday.

There is concern among hospitality stakeholders about the looming impact of Omicron on Jamaica’s tourism prospects that are on the rebound after a withering 2020 when the pandemic decimated the industry and wiped out tens of thousands of jobs.

Bartlett, who spoke with The Gleaner from Madrid, Spain, where he is engaged in meetings, said it was understandable how the world and major players were reacting to the identification of the variant.

“We are managing uncertainty, and the nature of how the COVID virus has behaved leaves you in a position where every new variant creates its own bit of concern and anxiety,” he said.

More transmissible than other variants

Omicron, first detected in South Africa, is believed to be more transmissible than other variants, including the fast-spreading Delta, but there does not appear to be evidence that it is more deadly.

Epidemiologists have indicated that current vaccines would still offer some protection, although drugmakers Pfizer, Moderna, and others said they would be able to make modifications, where needed, to boost efficacy.

Jamaica’s Ministry of Health and Wellness has imposed travel restrictions on a number of African countries where the virus has been found, including Botswana, Eswatini (formerly Swaziland), Lesotho, Malawi, Mozambique, Namibia, South Africa, and Zimbabwe.

Just last weekend, president of the Jamaica Hotel and Tourist Association, Clifton Reader, projected 65 per cent average occupancy for the winter season, which begins December 15 - which would mark a restoration of 2019 pre-pandemic levels.

But that optimism is under threat.

“We are obviously concerned but we need to know more about the new strain before we start to put in heavy restrictions,” said Reader on Sunday, adding that the new strain may spread faster but with mild effects.

“The key principles of protocol control, pretesting of all visitors to Jamaica, should be our first line of defence. Vaccination of our population must also remain high priority,” he argued.

Jamaica’s tourism protocols established in June 2020 and its Resilient Corridor concept have been tagged by Bartlett as a proven bubble that has limited infection levels.

In the meantime, the World Trade Organization has postponed indefinitely its ministerial conference that was set to be staged in Geneva, after several governments imposed travel restrictions that would have prevented officials from reaching Switzerland.

Stocks, oil prices, and government-bond yields slumped after South Africa revealed the new variant to the world, and The Wall Street Journal said the Dow ended with its worst Black Friday on record.

Amid uncertainty on how long COVID-19 will continue to dog the tourism industry, Reader pointed out that the introduction of economic, self-administered kits would be a game-changer in the detection, isolation, and quarantining of individuals.

“Of course, that quarantine would be determined by a positive PCR test,” he said.

Europe, Latin America, and the Caribbean account for the remaining eight per cent.