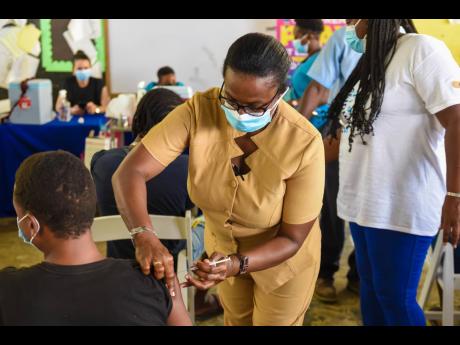 File
A resident receives a dose of a COVID-19 vaccine at the Petersfield Primary School in Westmoreland recently. The vaccination site was organised by the JN Foundation with support from American Friends of Jamaica. Physicians have urged Jamaicans that current vaccines offer significant protection to all variants of the coronavirus.

Physicians are reaffirming the need for Jamaicans to get vaccinated against COVID-19 as a new variant deemed highly transmissible has already triggered the imposition of travel restrictions in several southern African states, this as the United States and Europe battle with surging infections with winter approaching.

Medical Association of Jamaica (MAJ) President Dr Brian James told The Gleaner that the impact of the island's fourth wave, which is projected to hit in December or January, will be directly related to the level of immunity the population has against the coronavirus.

Though much is unknown about the inner workings of the Omicron variant, there are certain fundamentals that hold true for most, if not all, strains, said James.

“There are couple things that we know, though. One is that the treatment of the Omicron variant is no different from the treatment of the previous variant. Therefore, in terms of expertise, that is not a problem. The problem is in relation to capacity, and whether or not the capacity is there is related to how many people get sick enough to need to be hospitalised particularly,” James said.

“It comes right back down to getting enough people vaccinated. There is no evidence that any of the variants have escaped the clutches of the vaccine.”

Jamaica's March 2022 target of 65 per cent herd immunity is under threat as vaccination here lags all Caribbean countries, on a per capita basis, except for Haiti. Less than 18 per cent of the Jamaican population is fully vaccinated.

But, even among the vaccinated, there is growing anxiety about the great unknown.

Desrine Bygrave, 58, is fully vaccinated with AstraZeneca but has been reading reams of information on the emerging variant.

“I read that the vaccines which were designed using the original strain may not be as effective. That part concerns me most of all,” she said.

That misgiving has been dismissed by most experts in the medical community, including James, who say vaccines still offer a strong, though not impermeable, shield to severe illness all variants.

Julis Morris, 30, another fully vaccinated person, told The Gleaner that he has begun to wonder if he has subjected himself too early to inoculation.

“Vaccines will not prevent one from catching the virus, but it minimises hospitalisation and sickness. I am wondering, though, if I had waited, if I would be better off. I may be required to get a booster shot. I am hoping that I will be able to withstand this horrific variant,” Morris said.

Market vendor Iselin Newby, 40, who has taken the vaccine, said she hopes that the new variant will stay away and allow for normality among shoppers leading to the Christmas period.

Since the March 2020 outbreak in Jamaica, sales have never been better than they are now, said Newby. She is wary that the new variant could threaten the revival of the Jamaican economy, especially with the most profitable shopping season only weeks away.

Newby is vaccinated with the one-shot Johnson & Johnson and is concerned if she will need a booster to stave off the gathering threat.

“COVID is still here, but at least we see where some people understand the virus and we a move into post-COVID era like the PM said.

“Now, what we going to do if the new one get here and take over the place? Lock down again?” Newby asked.

The Jamaican Government followed lockstep with much of the world in imposing travel barriers, on Saturday, on travellers from a number of southern African countries where the Omicron variant has been identified. Jamaican citizens will be allowed to return to the island under state-supervised quarantine.

Dr Mindi Fitz-Henley, president of the Jamaica Medical Doctors Association (JMDA), said that the Omicron variant could compound management of the pandemic if the fourth wave emerges in weeks as is anticipated.

Fitz-Henley is urging Jamaicans to maintain the time-tested and proven protocols of getting vaccinated, wearing a face mask, keeping physically distant, and ensuring good hand and oral hygiene.

She is worried that healthcare workers will again bear the brunt of another wave of hospitalisations.

“Some would assume it would be easier because you know we are accustomed to knowing how things are going at this point in time. It's not new for us. However, at this time, you're looking at an additional issue which would be burnout, physical exhaustion, mental exhaustion, persons are out sick,” the JMDA president said.