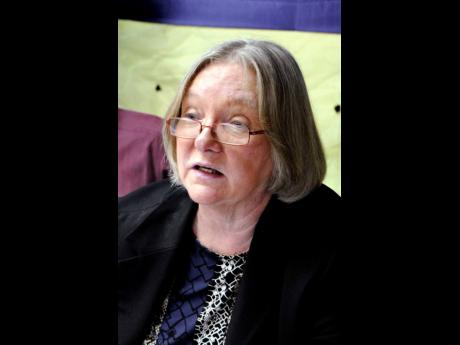 Veteran attorney-at-law Nancy Anderson has been lauded in death for her fierce advocacy for human-rights causes, especially for the vulnerable who languished on the margins of society.

Anderson, an American migrant, was a leading voice for the Independent Jamaica Council for Human Rights whose firmness in championing the fight for fundamental rights contrasted with her mild-mannered personality that radiated warmth.

She died on Sunday after a brief illness.

Susan Goffe, who worked with Anderson for more than 20 years but who knew her for much longer, said that the quantum and worth of her life’s work in law, rights advocacy, and legal education could not be easily assessed.

She recalled with fondness the generosity of spirit that endeared Anderson to her and others.

“When I first started volunteering in the human rights field with Jamaicans for Justice, one of the things that struck me about Nancy was that she was always willing to share of her vast experience with the fields. She was very generous to give guidance, to make suggestions and recommendations, and so on.

Director of Public Prosecutions Paula Llewellyn recalled Anderson’s instrumentality in working alongside Dr Lloyd Barnett in Citizens’ Action for Free and Fair Elections in ensuring that Jamaica had an independent watchdog for national elections.

Tom Tavares-Finson, QC, remembered Anderson for her commitment to the voiceless in the justice system.

Among the landmark cases in which Anderson played a pivotal role was the 2002 release of 76-year-old Ivan Nettleford, a mentally ill man who, at the time of her intervention, had been remanded for 29 years.

Nettleford, who was lost in the justice system under the erroneous surname Barrows, came to national prominence after a Sunday Gleaner exposé on prison injustice.

It was a concern that sparked evangelical zeal by Anderson in legal aid over the following two decades, leading to high-profile victories such as the 2019 release of ex-cop 61-year-old Walter Blackstock, who spent 31 years in prison without standing trial and having not entered a guilty plea for murder.

And even a 2017 incident in which she was assaulted by a mentally ill inmate did not blunt the force of her activism.

Anderson also played a key role in the landmark Caribbean Court of Justice victory in 2013 in which she was co-counsel for Jamaican Shanique Myrie, who sued the Barbadian government after she was subjected to a humiliating cavity search, detained, and sent packing back to her homeland the next day.

In December 2015, Anderson, in the 4th Charter of Rights Lecture in recognition of International Human Rights Day, said that despite the passage of the Disabilities Act, much more needed to be done to protect the rights of persons with disabilities.

“It is critically important that the recognition and protection of the rights of persons with disabilities be enshrined in the supreme law of the country, that is, in the national Constitution,” she said.