Shirley to head new eight-member board 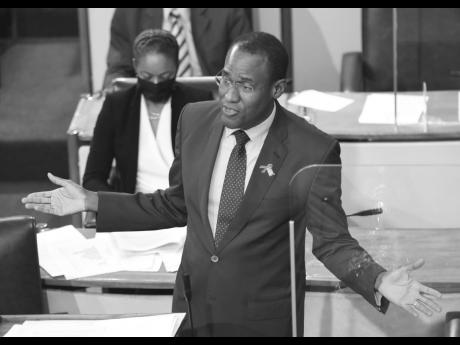 The controversial contract that led to sharp dissent among former board members of Clarendon Alumina Production (CAP) has now been placed under the microscope of the Pamela Monroe Ellis-led Auditor General’s Department (AuGD).

Finance and the Public Service Minister Dr Nigel Clarke said on Tuesday that the AuGD had started to collect information on the matter that spilled over in the public domain and led to the dissolution of the board by Transport and Mining Minister Robert Montague.

Prime Minister Andrew Holness subsequently transferred CAP from Montague’s ministry and placed it under the stewardship of Clarke at Finance.

CAP, which is 100 per cent owned by the Government of Jamaica, has a 45 per cent interest in the unincorporated Jamalco joint venture with General Alumina Jamaica owned by the Noble Group.

Clarke on Tuesday named a high-powered new eight-member board of CAP, chaired by Professor Gordon Shirley.

In a statement to Parliament, Clarke said that the unincorporated nature of the Jamalco joint venture has outlived its usefulness. In its current form, the arrangement represents an untenable fiscal risk to the Government, he added.

It was reported earlier that chairman Norman Reid had stepped down in protest against the renewal of a multimillion-dollar contract with St Lucia-registered company, CCPA Capital Partners. The contract had been renewed every six months over a two-year period.

Clarke made it clear that the contract at the centre of the dispute among former CAP board members which expired on October 11 this year would not be renewed.

The finance minister told members of the House that CAP was no longer indebted to its joint-venture partner Noble Holdings Limited, noting that the Government had provided some US$200 million in the last two years to pay down the debt.

He said one of the immediate priorities of the new board is to work with Noble to chart the course for the restart of production at Jamalco in the quickest possible time.

In September, fire did extensive damage to the Jamalco bauxite plant, leading to a halt in production.

Over the last 16 years, the Government has funded CAP to the tune of US$800 million. For the similar period, CAP has only been able to earn a profit this year before the fire at Jamalco.

The finance minister told his parliamentary colleagues that the vision of the Government is to eventually own its 45 per cent stake in an incorporated Jamalco that “we proceed to take public on the Jamaica Stock Exchange”.