Several detained after shots fired in fracas at Meadowrest 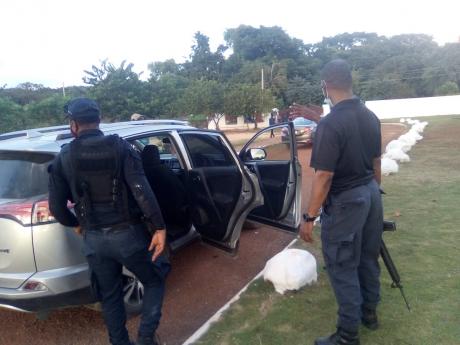 Photo by Rasbert Turner
Police officers search a car at the Meadowrest Memorial Gardens in St Catherine yesterday after responding to reports of shots being fired during a clash between security personnel and mourners. One security guard was reportedly injured and several persons detained.

The cops were called about 2:30 p.m. after a dispute developed between security guards and a group of mourners and shots were reportedly fired.

One person told our news team that a security guard was injured in the fracas.

“Yes, dem attack the security and cut him and a tussle start. Shot fire and so police come,” said Marvin Davis.

“We are here to maintain the peace, which was disrupted earlier,” confirmed Deputy Superintendent of Police Linroy Edwards.

As a result of the disturbance, the main road leading to the cemetery was blocked and several hearses seen waiting outside the compound for clearance to enter the burial ground at which there are frequent disputes.