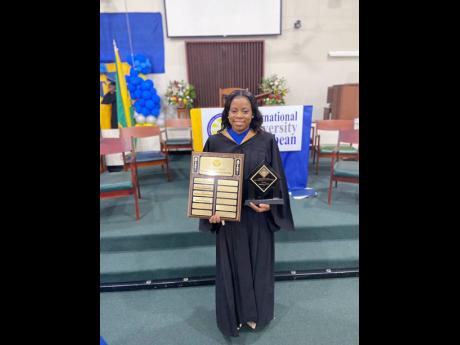 Contributed
Shamoya Smith showing off some of her awards.

Tears flowed from Shamoya Smith’s eyes midsmile as she walked the stage last Thursday during the International University of the Caribbean (IUC) graduation ceremony at Hope United Church in St Andrew.

It was a moment of immense gratitude when she received the Transformational Leadership Award for her years of outstanding service.

Smith credits her selfless acts to countless rock-bottom moments that motivated her to open her heart to others who may be facing difficulties, even when it required her giving assistance out of her pocket.

When Smith was born, her then 15-year-old mother gave her to a pastor, who afforded her a very comfortable life as a child.

However, the death of her mom when she eight years old sent her life into a tailspin that threw her on a journey of discovering her strengths.

She was snatched from a stable home and placed into state care until custody was granted to her father and aunt.

Overcoming a series of abuse and neglect as she bounced between homes, she decided from very early on that she would excel at everything she did and remained on the honour roll in primary school and at the secondary level.

A rocky relationship with her father led to her leaving the Windward Road, Kingston, home at age 14 to live with a church sister.

At the time, she yearned for her father’s approval and wanted him to be proud of her academic accomplishments.

Smith eventually went to live with grandfather in Mountain View, but she passed away shortly after.

Despite the slew of challenges, she graduated from Dunoon Park Technical High School with eight subjects, as the Government and the National Commercial Bank paid her exam fees.

Smith was awarded scholarships to two universities and was also accepted to read for a degree at The University of the West Indies, Mona.

Admitting that she only learned of IUC when she was awarded the scholarship for her involvement and representation in co-curricular activities, she was grateful to be blessed with the opportunity.

The university paid 65 per cent of her tuition annually for four years.

“I did not know where the remaining 35 per cent was going to come from, but I had faith,” Smith said, sharing that she wrote countless letters, never took no for an answer and always kept dreaming and believing.

At the university, she took part in several initiatives and continued along the path of service and became president of Circle K International in March 20202 and served for a year. She continues to be an active member of the Kiwanis Club.

“I went through university, four years of my life without paying a red cent,” said Smith, who graduated with a Bachelor of Science in Business Administration.

Smith expressed gratitude to all who have assisted her along the way.

She is now seeking employment and plans to start her master’s at IUC.