Parents crash into hurdles in finding children not ruled missing 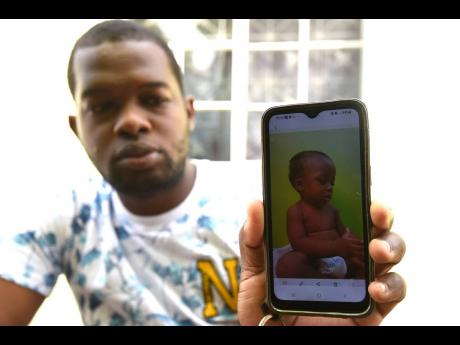 Kenyon Hemans/Photographer
Winston Burrowes of Portmore, St Catherine, is pleading for help from state agencies in finding his infant son. But he has discovered major hurdles in locating the mother, who he said vanished with the child in November 2020.

Winston Burrowes has been left heartbroken after the mother of his one-year-old son disappeared with the infant just over a year ago from their St Catherine home. He claims to have only successfully contacted her by telephone once. She vowed never...

Winston Burrowes has been left heartbroken after the mother of his one-year-old son disappeared with the infant just over a year ago from their St Catherine home.

He claims to have only successfully contacted her by telephone once. She vowed never to return.

According to Burrowes, the relationship became strained with the onset of the coronavirus pandemic after he was unable to maintain a steady job. He denies having abused her.

Burrowes said after leaving for work on November 14, 2020, he returned to an empty house. He said he has not seen Kerry-Ann Johnson – with whom he had reportedly lived for more than a year – or his child since.

The Cedar Grove, Portmore, resident said that he has sought assistance from the police, the Child Protection and Family Services Agency (CPFSA), and the Family Court but, to date, has not received any help.

With no clues to an address for the missing woman, Burrowes has been told by state agencies there’s little they can do.

That’s the dilemma facing Burrowes and potentially dozens of Jamaican parents who have to hunt for their children long before custody battles reach the courtroom.

Public relations manager at CPFSA, Rochelle Dixon Gordon, told The Gleaner that issues of legal custody, care and control, and access to the child have to be determined by a court on an application by either father or mother.

“If this has not occurred, then both parents are entitled to the right of custody, access and care and control of their children,” she said of Burrowes’ case.

That reality has sunk in over the last five months for Anna-Lisa Thomas, who whipped up social-media frenzy, generating hundreds of shares, retweets and likes, after reporting that her eight-year-old daughter has been missing since summer.

The two are set to reunite today after a custodial stand-off involving the father came to an end on Thursday.

Thomas said that her daughter was left in the care of the child’s paternal grandmother, who resides in St Catherine, in July.

But when the mother of three expected to welcome back the child in time for the new academic term, relations became strained and communication broke down.

Thomas said that the child’s school subsequently made contact expressing concern that she had not been attending online classes.

“I asked my sister to call the relative and she said, ‘(name omitted) is not here and I don’t know where she is,’” Thomas told The Gleaner, noting that the call ended abruptly.

She said she reported the matter to the police, who indicated that unless she obtained a court custody order, they could not intervene.

The Gleaner contacted the police who confirmed that Thomas had filed a report but said that their hands were tied because the child was with a parent and unharmed.

Gary Messam, the child’s father, told The Gleaner on Thursday that his daughter was not missing, and that she was doing well.

He also noted that she was attending a different school.

Hours later, Messam reached out to The Gleaner and confirmed that the eight-year-old would be allowed to return to her mother on Friday afternoon.

Such conflicts are not uncommon, said human-rights attorney-at-law Nastassia Robinson, noting that they represent greater cultural and social problems in Jamaica.

She said, however, that under the Children (Guardianship and Custody) Act, each parent has equal rights to the child.

“When there is a dispute as it relates to who should have care and control of the child, it now becomes a matter that needs to be decided by the court by way of an application for custody before the parish court,” Robinson pointed out.

She said the court then assesses the situation and determines which parent is better suited for primary custody and what the arrangements should be.

Section 9 of the act says where two or more persons act as joint guardians of a child and they are unable to agree on any question affecting the welfare of the child, any of them may apply to the court for its direction.

Robinson said while in some instances the police’s hands are tied, they often act too slowly in defusing the conflict and forging a resolution before the matter reaches the court.

She insists, however, that no parent has the right to deny the other parent access to his or her child.