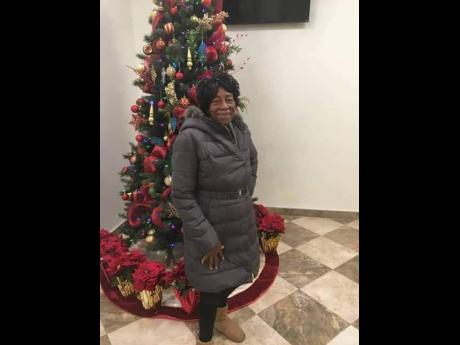 Contributed
Seventy-seven-year-old Dorothy Thompson, who reportedly lost her life on Thursday while trying to part a fight between two of her grandsons in Kemps Hill, Clarendon.

Travis DeSouza is now trying to process the fact that his 77-year-old grandmother is dead, allegedly at the hands of one of her grandsons in an incident he describes as “pure foolishness”. Recalling the events leading to the tragedy in Kemps Hill,...

Travis DeSouza is now trying to process the fact that his 77-year-old grandmother is dead, allegedly at the hands of one of her grandsons in an incident he describes as “pure foolishness”.

Recalling the events leading to the tragedy in Kemps Hill, Clarendon, on Thursday afternoon, DeSouza told The Gleaner that the two parties, who are cousins, were having a dispute “over foolishness”, when his grandmother, Dorothy Thompson, tried to get between them to bring an end to the fight.

He said that she had even called him on the phone to intervene, but at the time, he couldn’t quite get to her.

He was spurred to action when she cried out, “Jesus Christ!”

DeSouza said that hastily drove his truck to the house, upon which he saw one of the persons, who was involved in the fight, hurrying towards him and holding their grandmother.

“Mi affi tek mi grandmother from him, put her in the truck, and rush wid her go a di clinic,” he recalled, adding that the Lionel Town Hospital would have been too far away.

Despite their best efforts, the doctors could not save Thompson.

Overcome with grief, DeSouza described his grandmother, who was well known in the community, as a friend and someone he could turn to for assistance or advice about anything.

“Everybody love her. She do so much good and especially inna my household. Growing up, mi never know no father. From mi enter this world, a she one mi know as a father; every role she teck up. She a di one who teck care a mi come straight up, even now,” he said.

The thought that she will no longer call to check up on him, enquiring whether he had eaten or telling him to take care of himself, has left him heartbroken.

And even as he mourns her passing, he is appealing to the suspect to turn himself in to the police.

He disclosed that the second party in the fight was also stabbed and slashed and received several stitches.

DeSouza is hoping the family will be able to heal and the tragic incident will not drive a wedge between relatives.

“Honestly, now is not the time to fight among wiself. Everybody must come together and see how we can resolve this the best way. Now is not the time to carry vengeance,” he said. “As much as we lose Mama inna one way we nuh supposed to lose har, it grieve me. Mi a process it same way still,” he said, adding that his grandmother would not have wanted to see them fighting among themselves.

Deputy Superintendent Anton-Gur Cardoza, head of operations for the Clarendon Police Division, told The Gleaner late last night that a suspect accused was still being sought.

Up to November 27, Clarendon had recorded 96 homicides, a 10.3 per cent increase on the 87 murders committed for the corresponding period last year.