Gungo peas, sorrel sales yet to pick up as Christmas nears 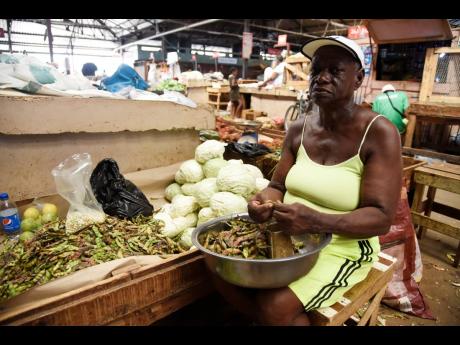 Nicholas Nunes/Photographer
Victoria Davis believes her potential customers are still being hit in the pockets by the COVID-19 pandemic, resulting in very slow gungo peas sales so far with less than three weeks before Christmas Day. 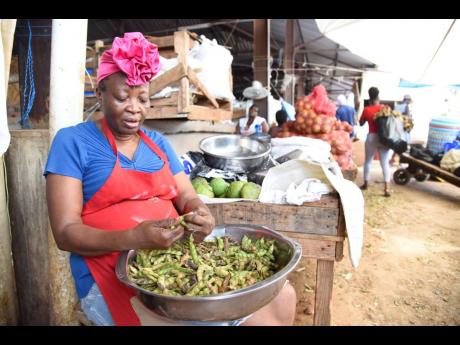 Nicholas Nunes/Photographer
A vendor for more than two decades, Cynthia shells pods of gungo peas in the Coronation Market in downtown Kingston in hopes that sales will pick up soon. 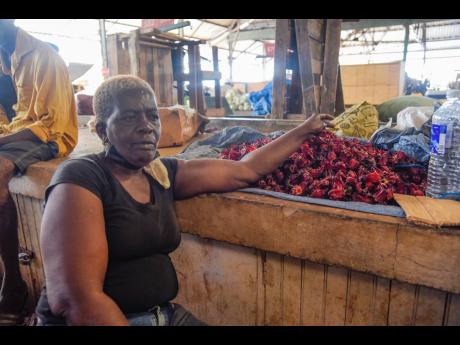 Nicholas Nunes/Photographer
Minutes before noon yesterday, Coronation Market vendor Pauline Meredith was yet to sell a single pound of sorrel inside the downtown Kingston facility.
1
2
3

Vendors of gungo peas and sorrel in downtown Kingston’s Coronation Market are hoping for a turnaround in flagging sales for the Christmas season.

With just over two weeks before Christmas Day, the expected rush of customers stocking up ingredients for the season’s favourite fares has not yet materialised.

This has led to concerns among some vendors that they may not be able to make a profit this year.

The higgler, who has been in the business for more than two decades, said that many of the small businesses – which would have traditionally been boosting her sales by purchasing up to 40 quarts of peas – have been folded due to the pandemic.

Gungo peas are now being sold for $600 to $700 per quart and prices are expected to rise as the holiday draws nearer.

Though some households have resorted to the convenience of sourcing canned peas instead, the vendors still believe that there is a market for the peas straight from the pod.

Vendor Victoria Davis, who also sells gungo peas in the market, said that people just “nuh have no money to buy anything”, noting that the pandemic has greatly impacted incomes, especially amid inflationary pressure on food prices all year.

This point was supported by a sorrel vendor, who retails the popular drink ingredient for between $230 and $250 per pound.

“Some of them want the stuff, but them ask and move on. They want it, but financially, it look like it strenuous,” the vendor said.

She also lamented what she views as the lower-than-normal turnout of shoppers in the market a week into December.

“Is mainly on the road the crowd is; they hardly come inside,” she said, lamenting that her husband, who plants the crop, had reaped up to 20 pounds last week.

Because of slow sales, she has had to depend on selling other market produce to boost her income.

The vendors, however, remain hopeful that as Christmas Day nears, they will see more patronage from last-minute shoppers.