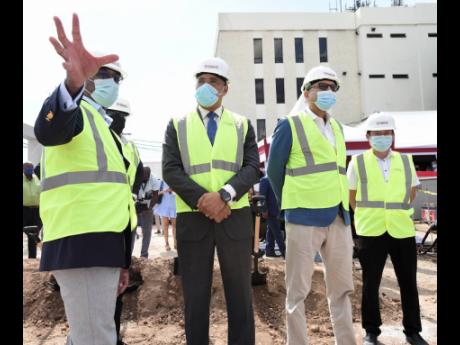 Holness said the sector is critical to positioning the capital city as the leading regional hub and boosting the country’s economic recovery amid the fallout from the coronavirus pandemic.

He pushed back at reflexive resistance to major construction projects, saying profit was not a bad word and that critics should not manufacture the narrative of a “class warfare” pitting the society against investors.

That building momentum, however, runs the risk of worsening the deficit of communal green space amid growing urban density.

Already, the Government is facing harsh criticisms over its management of the environment and questions have been raised about its commitment to conservation as multi-storey residential and commercial structures reshape the Corporate Area’s skyline.

Holness said that he has taken note of the complaints by residents and of alleged breaches by developers. The matter came up for discussion at the recently concluded Cabinet retreat.

“It doesn’t make sense that we renew and then end up with a concrete jungle. So, the environmental and governance concerns in the renewal of our city are important,” Holness said at Tuesday’s groundbreaking ceremony for One Belmont in New Kingston.

“We hear the cries and concerns and we are grappling with the issue and I give all the residents who have been raising these concerns the assurance that it will be addressed.”

Construction has been a constant silver lining in the coronavirus cloud that decimated many sectors of the economy in 2020 – a growth trajectory that has continued well into the current year.

Its 17.4 per cent second-quarter growth has significantly helped to boost overall GDP growth of 14.2 per cent.

The $3.75-billion One Belmont project is a 79,000-square-foot Class A corporate office space being developed through a partnership between Sygnus Real Estate Finance and Audere Holdings Limited.

It is expected to boast four parking levels and five storeys of offices specifically designed for the post-pandemic period with a suite of technological features to include touchless elevators, doors, and bathroom fixtures, as well as an automated infrared camera system and LED lighting.

A specially designed rooftop for entertainment purposes is also a feature.

Holness said the development is further testimony to growing investor confidence in the country’s future.

The prime minister said, at the same time, that little to no social progress can be guaranteed without having a partnership of capital, entrepreneurial risk-taking, government, and labour.

“What we have to do as a country is to begin to recognise and respect the value and importance of each member of that partnership. We need to stop this kind of partnership and class warfare in our country where we want to cast people who are in business as exploiters,” said Holness.

“We want to make profit a bad word, and we need to take that out of our minds, but also to understand that people who have capital and people who control business also must recognise their social and governance responsibilities to the poor,” he added.