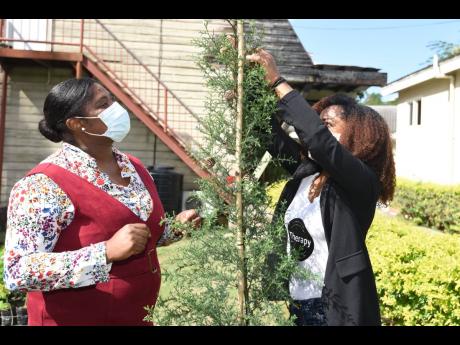 Kenyon Hemans/Photographer
Francine Black Richards (left), senior director of corporate communications and marketing at The Forestry Department, and Danielle Thompson, social media ambassador for 876 Volunteer and organiser of the No-Cut Christmas campaign, attend to one of the Cupressus trees being grown in a pot as they try to convince Jamaicans to refrain from cutting down trees for decorative purposes this season. 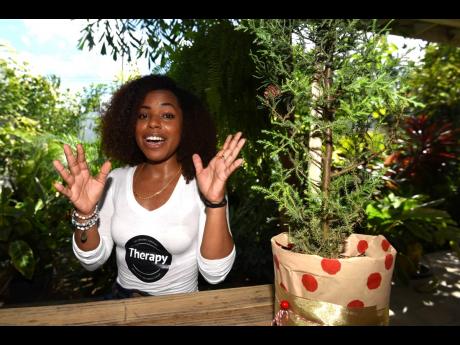 Kenyon Hemans/Photographer
Danielle Thompson wants Jamaicans to preserve the environment and consider planting more trees to combat deforestation instead of cutting them down for the Christmas season.
1
2

Jamaicans are being urged to cut down fewer trees for decorative purposes as they celebrate Christmas this year as the 876 Volunteer non-profit organisation ramps up its On a Mission for Modda Nature drive with its No-Cut Christmas campaign to promote the preservation of the island's resources.

The initiative, which is being rolled out by Caribbean Tree Planting Project and the 876 Volunteer organisation, is seeking to beautify Jamaica, starting with homes, by having more citizens embrace a culture of planting and actively protecting the Earth's resources with three-inch and inch-inch potted Cupressus trees – which have a lifespan of up to 25 years if well maintained – being sold for $5,000 and $6,000 respectively.

It is also enticing fruit lovers to purchase seedlings for $900, with Otaheite apple, East Indian mangoes, soursop, ackee, and many other plants available.

Complementary gifts of dog paw ornaments, eco-friendly wrapped pots, access to a tree-tracking app and a tree-care manual have been included as the organisers try to boost the global efforts of fighting climate change and break the cycle of deforestation.

Danielle Thompson, a member of 876 Volunteer, told The Gleaner that a two-pronged approach is being employed and all proceeds from the campaign will be donated to the Montego Bay Animal Haven to boost the shelter's efforts to rescue, rehabilitate, and rehome forgotten animals.

“We wanted to truly celebrate them and assist them as they have lots of bills to help our animals,” Thompson said on Tuesday.

Since the launch via social media last Friday, she said that orders have been pouring in and the project has been warmly received.

“They seem to really love the idea of planting and having it go from generation to generation ... and to have that be a part of your holiday legacy is really powerful,” said Thompson.

Francine Black Richards, senior director of corporate communications and marketing at The Forestry Department, told The Gleaner that the no-cut project will contribute to efforts to meet Jamaica's target of planting three million trees in the in three years, an initiative launched in 2019 by Prime Minister Andrew Holness.

Additional nurseries outside of those operated by The Forestry Department have also been contributing to the national initiative. Recent commitments have also been made for the planting of 1.8 million trees by the Private Sector Organisation of Jamaica.

“We are fully determined to complete the activity by October next year,” Black Richards said.

Up to October 1 of this year, more than 730, 000 trees had been distributed and planted since the launch of the initiative, she said.

Later this month, The Forestry Department will also be establishing a rent-a-tree project, catering to persons who would not want the hassle of taking care of their Christmas tree year-round and would be able to return it after the holiday season.

“The only headache you'll have is to take care of it during the time,” she said.

With the spirit of volunteerism heightening during the Christmas season, Thompson, who has been a part of the 876 Volunteer since 2020, said, “I have never felt more fulfilled.”

She added: “There is nothing quite like having a group of people who absolutely love nurturing Jamaica and giving back.”

Thompson anticipates that going forward, the organisation's membership will increase and boost its ability to carry out more projects across the island.

To order a tree, click the link in the Instagram bio of the @naturemytherapy profile or send an email to naturemytherapy@gmail.com or contact them via WhatsApp at 876-871-2959.

Payments can be made through money transfer.

To donate to the Monetgo Bay Animal Haven without buying a tree, persons can visit www.montegobayanimalhaven.com