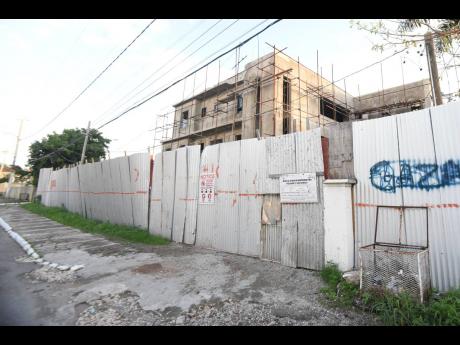 Kenyon Hemans/Photographer
The apartment complex under construction at 10 Roseberry Drive in St Andrew that has been cited for breaches. The Kingston and St Andrew Municipal Corporation and its inspection regime are under scrutiny.

There are more questions about negligence or possible corruption at the Kingston and St Andrew Municipal Corporation (KSAMC) and the National Environment and Planning Agency (NEPA) following a court case that revealed that a developer built 32 bedrooms at a St Andrew development approved for just 12.

In ruling against the developer’s quest to change community rules on Monday, Justice Natalie Hart-Hines turned the spotlight on the two public watchdogs by noting that a country is in decay when it becomes lawless and corrupt because those responsible for managing it fail to do their jobs.

“The KSAMC and NEPA have been dilatory in their mandate to enforce local planning laws and regulations and to promote sustainable development,” she said of the situation at 10 Roseberry Drive in Acadia, St Andrew, where Belgravia Development Company, led by Cliff Rochester-Butler, is building the apartment complex.

The judge rejected Belgravia’s application to modify the restrictive covenants, which are stipulations on property titles to protect property values and maintain neighbourhood aesthetics.

In January 2019, Belgravia sought the court’s permission to modify the restrictions to build a multifamily structure in a mostly single-family area.

However, two residents, Jaleel and Guilda Handal, objected, arguing that the development would impact their privacy, peace, and security.

The judge ruled in the residents’ favour on Monday after hearing arguments in October and visiting the development.

It was from those visits that the judge confirmed many of the violations of the permits, leading her to question KSAMC and its inspectors.

Handal was represented by Gavin Goffe and Matthew Royal of Myers, Fletcher & Gordon, while Jacqueline Cummings and Clifton Campbell of Archer, Cummings & Company argued for Belgravia.

Cummings said that some of the breaches were because of a “misunderstanding” by the developer’s representatives, who included project manager David McLeod.

Robert Hill, the KSAMC’s chief executive officer, told The Gleaner on Monday that the municipal authority will be reviewing the file and “will respond accordingly”.

There were problems from the beginning, as the judge observed that the property was less than half an acre and was “unsuitable” for a multifamily residence.

She argued that there was no compelling reason for why the authorities may have exercised discretion to allow the construction to go ahead in violation of the density rules that prescribe the number of habitable rooms per acre.

NEPA granted environmental permits on September 18, 2019, after which the KSAMC gave its approval on October 3, 2019.

“Armed with these permits, the applicant proceeded to commence construction, ostensibly unsupervised by the KSAMC,” read the 38-page judgment, which noted that the building is in breach of the permits.

“It would seem, at the very least, that the building inspectorate at the KSAMC failed to inspect the building at critical stages of construction, including the pouring of the concrete decking for each floor of the building. Had such an inspection been done, the breaches would have been apparent,” the judge wrote.

The developer was also singled out for violating even the orders of the court made after the Handals filed an objection on July 20, 2020.

It was noted that despite being aware of the objection and first hearing date set, Belgravia continued construction.

The judge said even after one of her visits to the site on July 17, 2020, where she warned the developer not to continue until the matter was decided, work was still carried out.

On October 1, Rochester-Butler gave evidence during the hearing that the building was “about 70 per cent complete”.

The judge also took issue with some comments from the valuation surveyor, Norma Breakenridge, whom Belgravia used to provide a report in December 2020 that supported its claim that the character of the neighbourhoud had changed sufficiently to allow for multifamily dwelling.

In the report, Breakenridge spoke generally of the increased demand for housing in the Kingston Metropolitan Area.

Although admitting that the Acadia subdivision was mainly single-family, she said shifts to residential use meant some of the restrictions were no longer relevant.

She pointed to five properties in the Acadia neighbourhood that had modified covenants and redeveloped to accommodate multifamily complexes.

However, the judge ruled that despite the presence of five multifamily residences in Acadia, the area was still heavily single-family-based and the residents were still entitled to enjoy the benefits the restrictions give.

Breakenridge’s report did not give the number of lots on the Acadia subdivision plan but the judge said her review showed at least 160, with just five units qualifying as multifamily.

Although the surveyor indicated that she did not visit the property, she told the court that Belgravia’s apartment complex did not overlook the rear of Handal’s house and that negative impacts of development would not be significant.

Visits on October 27 and 28, the judge wrote, revealed “deliberate attempts to hide the true state of the development design and layout from the court. Areas leading to other units were boarded up with fresh concrete present, thereby preventing the access of the court to these rooms.

“Some areas were only accessible by the balcony, which made the units not easily detectable. The court had to return on the following day to gain a full picture of the true size and layout of the building, from which it was revealed that there were several other rooms that are not part of the plan approved by KSAMC,” she added.

Justice Hart-Hines said she could not rule on whether the building should be demolished because Handal did not make an application for that, but she has invited the parties back to court on January 12, 2022, where she will hear submissions on consequences that may result in a such a directive.

But she said the KSAMC “might wish” to issue an enforcement notice.

The KSAMC has been under pressure in recent months over its approval and enforcement systems, forcing Kingston Mayor Delroy Williams to declare recently that the authority will be taking rogue developers to court.

The Sunday Gleaner reported at the weekend that the KSAMC admitted to an “administrative error” in the approval of a strata plan for 14 apartment units at 17 Birdsucker Drive, St Andrew, although the development was granted a permit for 12 units.

The KSAMC is appealing the Supreme Court decision that approvals it granted were illegal. A judgment is pending.