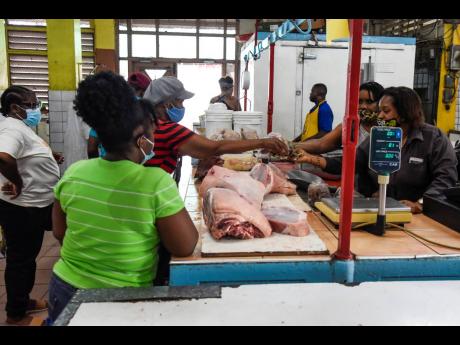 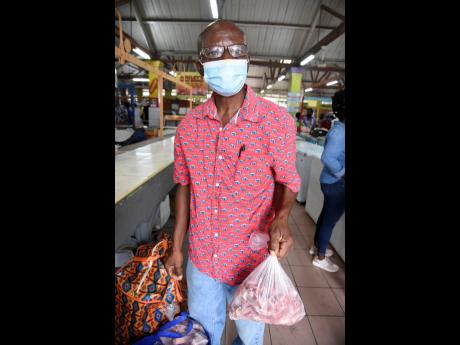 Nicholas Nunes/Photographer
Everton Percell says that mutton is a must-have for Christmas dinner at his house. Percell bought his favourite meat at the Cross Roads Market on Thursday.
1
2

Vendors at the meat market in Cross Roads have welcomed the uptick in sales for the Christmas season and are able to meet the increased demands of Jamaicans.

Linroy Sewell told The Gleaner that his customers have mainly been purchasing oxtail and mutton, which he sells for $1,700 and $1,000 per pound, respectively.

“The new curfew a turn up di sales. Everybody a buy up meat, and di place busier than last year,” Sewell said.

Donovan Ashman, another meat vendor, said sales for the Yuletide season have been picking up since the curfew hours were adjusted to 10 p.m. on December 10.

Ashman usually closes his doors by 7 o’clock but plans to stay open for a few more hours on Christmas Eve, with the curfew commencing an hour after midnight.

The sales going good. People a run in fi pork, oxtail, and goat. As mi quint, mi haffi stock up again,” he said.

The meat market buzzed with business on Thursday afternoon as customers came in small groups to make their purchases.

A customer who identified herself as Yvonne told The Gleaner that she found prices to be high.

“Oxtail is $1,700, and outside in the wholesale it’s $2,000. But I made preparations for it, basically a sacrifice. I have to get oxtail and goat, along with fish, or else it’s not Christmas,” she said.

For Margaret Christie, the prices are in line with the rise in global food prices. Inflation is currently running at 7.8 per cent.

“If you want it, you just have to buy it, or if you can’t buy your usual amount, buy less and top it up with some carrots and Irish potatoes,” she said.

Christie added that mutton, oxtail, and ham are must-have meats for the season.

“The prices not too bad. I can cope with it, and the meat at Cross Roads meat market is always fresh and nice,” he said.

Customer Patrick Hamilton, too, said that the meat prices were reasonable, considering the trend in food prices.

“It’s not really a favourite of mine, but I have it every now and again,” Hamilton said of oxtail.