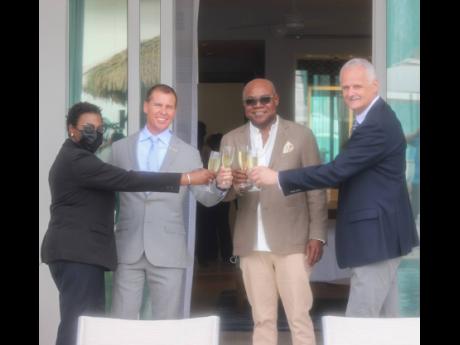 Affirming its confidence in the Jamaican tourism industry, Sandals Resorts International is pumping US$240 million in investment during a pandemic that has forced the sector into a spirit of resilience.

The company’s executive chairman, Adam Stewart, while unveiling 84 new rooms and suites at Sandals Royal Caribbean in Montego Bay on Thursday morning, spoke of the tremendous conviction the group has in Destination Jamaica.

The Jamaica-based resort company’s 2021-22 local projects include next summer’s construction of a brand new property to replace the demolished Jewel Runaway Bay, the completion of phase one of Sandals Royal Dunn’s River in Ocho Rios, and major expansion at Beaches Negril in Westmoreland.

“By virtue of our actions, we are signalling that we believe and are committed to the country of Jamaica and tourism at large, and we believe, ultimately, we will ‘get back to happy’, as we say it at Sandals,” Stewart emphasised during a ribbon-cutting ceremony, marking the first in a series of openings for the chain as it enters 2022.

Sandals Royal Caribbean is the second resort in the history of the organisation, and the chain has improved and transformed the hotel in what it tags ‘Sandalization’, offering epicurean journeys at nine restaurants; the option of seven pools; a one-of-a-kind private offshore island and overwater bungalows, which Stewart says have been the most aspirational and desirable hospitality accommodations anywhere in the Caribbean.

When combined with Sandals Montego Bay, which is located five minutes away, guests who stay at one, and play at two, have the option of 21 restaurants.

With 16 beachfront settings in Jamaica, Antigua, St Lucia, The Bahamas, Barbados, Grenada and, more recently, Curaçao, Stewart credits the chain’s success during a pandemic with their Sandals platinum protocol, which he says is the most comprehensive protocol of any hospitality company this side of the hemisphere.

“It has kept us safe. We have worked hand in hand with the Government of Jamaica with the national protocols. I think Jamaica has done incredibly well,” he said.

“Statistically, if you look at the extremely low positivity rates, Sandals’ positivity rate of 0.156 from the first of January 2021 to date, it shows that the protocols work.”

Citing World Health Organization data about surface contagion levels of one in 10,000, Stewart argued that the open-air layout of most Caribbean resorts lowered the risk of airborne spread.