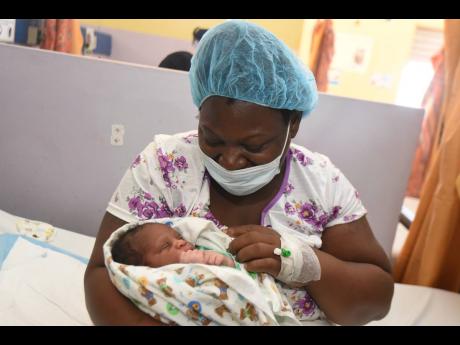 Kenyon Hemans
35-year-old Denesha Simmonds smiles at her very special Christmas present, Thabang Jordine, who she delivered at one o’clock Christmas morning at the Victoria Jubilee Hospital in Kingston. 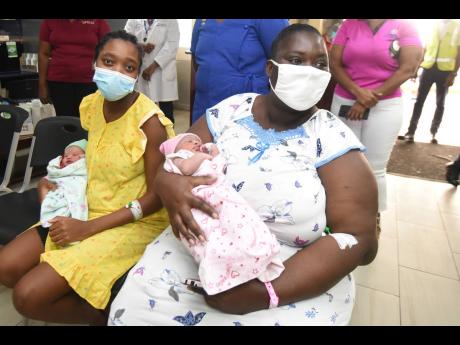 Kenyon Hemans
Carlene Johnson-Haughton (right) and Kelly Thomas gave birth to their Christmas baby girls at 2:45 am and 4:50 am, respectively, at the Victoria Jubilee Hospital in Kingston. 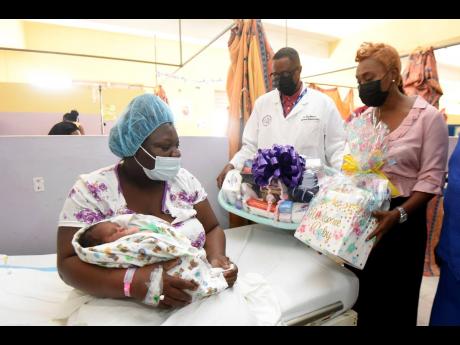 Kenyon Hemans
35-year-old Denesha Simmonds is showered with gifts for her Christmas baby, Thabang Jordine, thanks to the Kiwanis Club’s Christmas Baby Love Project at the Victoria Jubilee Hospital in Kingston yesterday. Presenting the goodies are state minister in the Ministry of Health and Wellness Juliet Cuthbert Flynn (right) and Obstetrician and Gynaecologist Dr Paul Mitchell.
1
2
3

Olympic Way is home to the first baby born at the Victoria Jubilee Hospital on Christmas Day, after mother Denesha Simmonds delivered a bouncing boy shortly after 1:00 yesterday morning.

Thabang Jordine, at roughly seven pounds, entered the world with a bang after his mother endured three days of labour pains, culminating in her first Caesarean section (C-section).

It was her fourth but certainly hardest delivery, said an obviously tired Simmonds who was greeted with much fanfare during an annual Christmas Baby Love Project put on by the Kiwanis Club Eastern Canada and the Caribbean Division 23 East.

She was showered with gifts: at least two baskets filled with items for the newborn and a playpen.

“It was definitely the hardest, the others were delivered normally,” said Simmonds, catching her breath between sentences. “I am very happy. I am grateful and thankful for the gifts. It is an overwhelming feeling.”

At home, a loving family and the neighbours await the newborn, said Simmonds, explaining that she had been admitted since last Wednesday and had been waiting anxiously to meet her son for the first time.

“My pressure was a bit high and they said they were going to keep me overnight and induce labour. I guess he was so stubborn he wasn’t coming,” she chuckled as state minister in the Ministry of Health and Wellness, Juliet Cuthbert Flynn, hospital staff and other members of the celebratory party paid her a bedside visit.

They hailed from Arnett Gardens and Hillcrest Road in Kingston. No names have been decided for either of their babies as yet, but Carlene said already her baby has a pet name: ‘Happiness’.

“There will be a Christmas baby on the ends, Curry pathway to be exact! From them see me coming out this morning, they said ‘Yes, the baby a come today,” she laughed.

Carlene added, “I don’t know if it is because this baby is a girl but I didn’t feel the other two. With this one, I felt every little thing.”

“The doctors told Kelly to push and she was pushing with her face and her chest. I had to tell her to push from below,” jeered Carlene, both mothers bursting into laughter.

“I felt like I was going to die. It is my first, so I went through a lot. It was three days worth of pain. But, now I am very happy,” said Kelly, laughing at Carlene’s banter.

A fourth baby was born at roughly 4:51 a.m. However, his mother was still on the maternity ward and was too tired to take part in the festivities. Her gifts were delivered later.