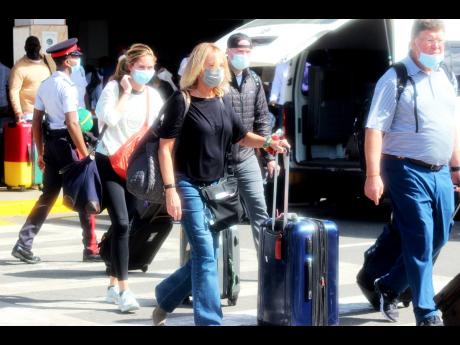 Ashley Anguin/Photographer
Tourists arriving at the Sangster’s International Airport in Montego Bay on December 15, the first day of the winter tourist season. 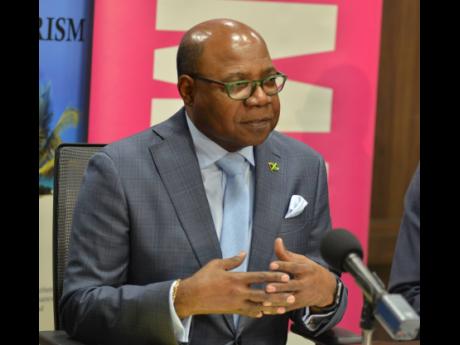 Leading hotel operations are losing an entire generation of their skilled labour force to other sectors, following the economic fallout from the COVID-19-induced disruptions to the travel and leisure industry. The tourism sector contributed 9.8 per...

Leading hotel operations are losing an entire generation of their skilled labour force to other sectors, following the economic fallout from the COVID-19-induced disruptions to the travel and leisure industry.

The tourism sector contributed 9.8 per cent to Jamaica’s gross domestic product (GDP) in 2019, and was poised for an even better showing the following year, with experts projecting US$4.4 billion in revenue, but virus-containing measures, including border closures, triggered the shuttering of many hotel operations and affected 170,000 direct jobs.

Tourism Minister Edmund Bartlett acknowledged in an interview with The Gleaner that skilled workers are leaving for other sectors, but expressed confidence that the learning curve would be minimal.

“About 80 per cent of the workforce of tourism are back, but they are not back in the same numbers in terms of skill sets like we had before,” Bartlett said. “The new demand that the post-COVID tourism is requiring is seeing a change in the skill sets and that is going to create a further disruption in the supply chain because you are now going to look for more tech-savvy workers and you are going to have to look for workers who are more flexible and adaptive.

“The good thing about the industry is that it trains readily. Jamaica is blessed with workers that have a natural tendency for hospitality, so the learning curve is very narrow.”

A study by Rosen College of Hospitality Management on COVID-19’s impact on the US hospitality industry revealed that of the roughly 9.6 million jobs that were lost since the US lockdown in April 2020, 80 per cent were low-income jobs. Prior to the pandemic, the industry accounted for nearly 14 million – or 10 per cent – of US jobs, but by the end of 2020, it had plunged to 3.5 million jobs.

Economic forecasts anticipated that the arrival of vaccines meant a rebound of the tourism and hospitality industry as travel resumed, but while tourists were quick to book travels and locals were quick to revisit restaurants and attractions, hospitality employees have not been jumping back on board.

According to the US Department of Labor, 4.3 million people quit their jobs in August 2021, of which 892,000 were hospitality employees.

Some 41 per cent of those affected in the US hospitality sector indicated that they endured a reduction in work time; one-third revealed that they did not have enough money to meet monthly expenses; approximately 33 per cent were concerned about their health and safety due to COVID-19, while 10 per cent switched jobs. Nearly 60 per cent said that their employer made changes during the pandemic that negatively impacted their financial situation.

Milton Roberts*, a Jamaican manager at one of the island’s premier locations, said that workers were exiting the local industry because of similar concerns.

“There is nothing in tourism for Jamaicans that work in tourism,” he said.

Roberts argued that while the industry produces the most foreign exchange for the country, more than 98 per cent of the workers in the sector are unable to access housing benefits from the National Housing Trust.

He also claims that financial institutions are reluctant to do business with his staff, most of whom are contract workers, though employed for over five years.

“All the persons that I hired within the past year are on contracts, and every 90 days, you have a struggle because you have to send people on contract breaks, and then it puts a dent in the operation because you cannot find the amount of people to cover in that time,” the industry player told The Gleaner.

Roberts says it is increasingly more challenging to motivate his staff, who continue to get the minimum in salaries, while expatriates are getting numerous benefits.

“So you walk on marbled floors, with chandeliers hanging over your heads, but you go home in frustration as you are either paying rent or have to capture a piece of land,” he said.

But Bartlett argued that the issue of contract workers was not peculiar to tourism, but has become a feature of the labour market arrangements in Jamaica.

A number of skilled workers are now opting for the more lucrative Overseas Hotel Programme, while some have ventured into their own businesses.

Tourism-related activities span several industries, including transportation, and Lenbert Williams the operator of the One Love Bus Tour in Negril has done more than 80,000 tours over the past nine years, but business has since slumped by more than 90 per cent since the pandemic.

He is hoping the Government will act decisively to prevent a devastating blow by the Omicron variant.

“Allowing the big man to remain open, while the small man has to close down does not demonstrate a government that is responsible. It is unthinkable that major restaurants can stay open and make their millions and the small operations like cookshops have to close down,” he said.

“When locals can enter an all-inclusive hotel and party all weekend with no restriction, but are pressured if they are part of a gathering in a local community, it is an indictment on the Government and policymakers,” he said. “… and PM [Andrew] Holness needs to fire his advisers and create a balance in how he manages the pandemic.”

Dismissing suggestions that there are different rules for the foreign investors, Bartlett said the resilient corridor, which zones and contains the movement of visitors vacationing in major resort areas, has been effective.

“What we do know is that we are able to build a resilient corridor, as a bubble, that the world recognises, and has the lowest infection level anywhere in the world,” he quips. “So we are confident that Jamaica has a product that is in demand and that has provided protection for our local people as well as our visitors that come here.”

When the news team visited Negril, small hotel operators reported bookings were on the increase after struggling through the off season, but were cognisant of the fact that things could change quickly, especially with the Omicron threat.

Weekend parties have grown in popularity and have been a key source of income for the all-inclusive during the off season, but are now on a pause, a senior manager, who requested anonymity, told The Gleaner.

“We are aggressive with the mask wearing and sanitising 24 hours per day,” he said. “We have a machine that sanitises the frequently touched areas ‘round the clock,” he added.

“Nevertheless, you cannot control social distancing because when your guests book in groups, it is very difficult,” he argued. “How can you tell a family that they cannot come together? So some things will have to be breached, no matter how you take it; it will never be 100 per cent perfect.”

Tour operators gathered along Norman Manley Boulevard in Negril playing dominoes to pass the time last week told The Gleaner that they were worried as the Canadians, who would normally be the early visitors to the island in the winter season, were cancelling their trips in significant numbers.

The uncertainties were also keeping the dozens of pan chicken vendors away, with only a handful seen along the unkempt strip.

The Hip Strip in Montego Bay boasts an array of businesses, including gift shops, restaurants and eateries, clubs, hotels, craft market, parks, and even the Canadian Consulate. Usain Bolt’s Tracks & Records, Pelican Restaurant, Coral Cliff, Margaritaville and the local’s favourite Wingz & Tingz are among a slew of world-class eateries in the one-mile space.

Chairman and CEO of Margaritaville Caribbean Group, Ian Dear, is anticipating strong responses from both cruise ship and land-based tourism, but is also hoping that over time, restrictions will be lifted to allow his operations in Negril and the Hip Strip to return to their regular closing time of 2 a.m.

Currently, the curfew hours are from 10 p.m. until 5 o’clock the following morning.

“When I speak to the hotels and the Jamaica Tourist Board, by all indications, we are holding up very well, and the winter tourist season is going to be a strong one because Jamaica is hot right now in the market,” Dear added.

“We benefit from all the arrivals and departures and that will only get stronger as we go further into the season. But one of our biggest challenges right now is to manage the evening business during the time that we are open,” he said.

“The majority of our business have been tourists in those spaces and so there is no reason why it should not work as part of the resilient corridor because once the protocols are being observed and enforced, it is something we feel should be expanded on.”

Dead End along the Hip Strip has become the entertainment spot for locals, with the beachfront thoroughfare lined with vehicles blasting music to revelling groups mixing in a bit of caution as police patrols keep a close watch.

“We’re not trying to be callous about it or careless,” said a female from one group approached by the news team. “Our health and safety is paramount, but if we have been doubly vaccinated and can party freely at certain locations, then we think we can enjoy ourselves responsibly within the given limitations in the public space.”

Wingz & Tingz enjoys the bulk of the support from locals, as much as 98 per cent owner James Symyruzum claims.

“We have never been dependent on tourism for business, but while COVID has been tricky for some businesses, the only thing that has been tricky for us are the curfews and no-movement days,” Symyruzum said. “ … And while I understand why these restrictions have to be put in place, we just hope that the impact of this thing slowly goes away.”

Symyruzum had to lay off some of his 20-man strong staff, but also lost key workers to the hotel sector.

“We lost key personnel to the hotel industry because they get to open all the time and we had to close just three days per week, so it was tough,” he said. “ I don’t want to call it hypocrisy, but it is ironic that here at a local beach where Jamaicans can come, the police will come and kick them off the beach, but other facilities along the Hip Strip, not even one kilometre down the road, their beach remains packed and unperturbed.”

“Is it because you can pay US$5, you cannot get COVID, but those who enjoy the free facility are the ones who spread the virus? It’s plain hypocrisy,” he quipped.