Alleged accomplice says Palacios was in room during Moise’s assassination 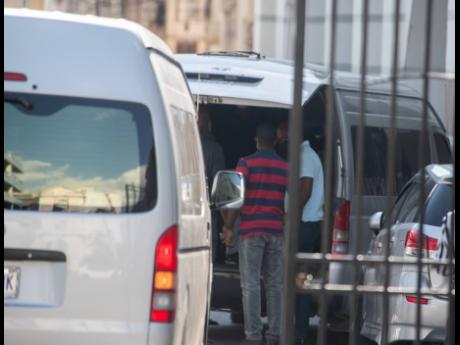 Gladstone Taylor
Police officers arrive at the Supreme Court with Mario Antonio Palacios Palacios on Friday. The court has ordered that the Colombian be released from custody tomorrow and placed on a flight to his homeland.

Mario Antonio Palacios Palacios, who is set to be deported from Jamaica tomorrow, was reportedly inside the private quarters of Jovenel Moise, along with a band of mostly heavily armed ex-Colombian soldiers, when the Haitian president was...

Mario Antonio Palacios Palacios, who is set to be deported from Jamaica tomorrow, was reportedly inside the private quarters of Jovenel Moise, along with a band of mostly heavily armed ex-Colombian soldiers, when the Haitian president was assassinated, three alleged co-conspirators have told investigators.

But there is no indication, based on the accounts of the alleged accomplices, whether the former Colombian military officer was directly involved in the July 7, 2021 torture and shooting death of Haiti's 58th president.

Moise was reportedly shot 12 times and had bullet wounds to his forehead and several to his torso. His left eye had been gouged out and bones in his arm and in his ankle had reportedly been broken.

His wife, Martine Moise, was also shot in the incident, but survived.

The accounts of the alleged co-conspirators are contained in a leaked report authored by Haitian investigative authorities, which detailed how the accused Colombian assassins were contracted for US$2,700 a month and began arriving in the Caribbean country up to one month before executing their deadly mission.

The accounts in the report, a copy of which The Sunday Gleaner has obtained, also claimed that the masterminds used a company registered in the country to finance the purchase of more than 60 high-powered rifles and pistols, thousands of bullets, cell phones and two-way radios that were used in the midnight attack.

Palacios is set to be released from custody placed on a flight destined for his homeland tomorrow, much to the disappointment of Haitian authorities, who have been fighting to have him extradited to their country to answer to the accusations.

The suspected assassin was captured in central Jamaica four months after Moise's assassination and has been kept in isolation at the high-security Horizon Adult Correctional Centre in St Andrew since October 21, when he completed a five-day sentence for illegally entering the island.

“The judge rightly acceded to the habeas corpus application,” said one of his attorneys, Carolyn Reid-Cameron, who had argued that her client's continued detention was unlawful as there was no legal basis for it.

“... It is only for security reasons why he is not at a hotel of his choice,” she said.

Outside the courtroom, Palacios smiled, shook hands and took pictures with Colombian Ambassador to Jamaica Jairo Clopatofsky Ghisays and his attorneys before he was led away in handcuffs.

Midway into the hearing, he was transported to court under heavy police guard on the instructions of presiding judge, Justice Courtney Daye.

The ruling dealt a major blow to Haitian authorities, who have described Palacios as a key suspect in Moise's killing and twice used diplomatic channels to compel their Jamaican counterparts to hand him over.

There was no response to the ruling from officials in Haiti up to late yesterday.

The first attempt, through an extradition request, was turned down because it did not meet the legal requirements of Jamaica's Extradition Act.

“This request, as a matter of law, could not proceed, could not be processed and was destined to fail,” added Llewellyn, whose office is Jamaica's designated central authority in extradition matters.

Llewellyn said she was not aware of the leaked report obtained by The Sunday Gleaner.

Palacios's attorneys had also not seen the document and could not provide a response to the allegations.

The 122-page report cited evidence collected by investigators and interviews conducted with some of the 44 suspects now in custody in Haiti.

It claimed that Alex Miyer Pena, another ex-Colombian army officer implicated in the assassination, admitted that he was contacted by one of the alleged plotters “regarding a contract to be executed in Haiti”.

The contractor, said to be affiliated to a company based in the United States, indicated that he was looking for a group of 20 Colombians for the project, which proposed to pay a monthly salary of US$2,700 to provide security for a presidential aspirant in Haiti, according to Pena's account.

Others, however, told investigators that they were aware from the outset that their mission was to assassinate the Haitian head of state.

By early June, according to the report, the group of 22 alleged mercenaries began their trek to Haiti. Among them was Palacios, who reportedly arrived on June 4.

“To enter Haiti, some arrived by plane through the diplomatic lounge at Toussaint Louverture International Airport and others through the Haiti-Dominican Republic border at Belladère,” the report said.

While their handlers stockpiled dozens of firearms and thousands of bullets, members of the group were housed at hotels and private homes until three days before the attack, when they all converged at the home of one of the alleged plotters, according to the account of suspect Naiser Franco Cataneda.

They made their move shortly after midnight on July 7, according to the report, travelling to the Haitian National Palace in a convoy of six vehicles, some of them fitted with diplomatic licence plates.

Some of the accused assassins wore vests emblazoned with the letters 'DEA', suggesting they were American law enforcement personnel.

A member of the president's security detail provided them with real-time information on his location, the report said.

With assistance from senior police insiders, they reportedly gained access to the palace after one member of the group used a megaphone to announce that it was a “DEA operation”, causing palace guards to lay down their weapons.

One suspect, Alejandro Giraldo Zapata, told investigators, during a July 18 interrogation, that Palacios was part of a six-man team, code-named 'Delta', which was tasked with breaching the 53-year-old president's private quarters.

Another suspect, Victor Albeiro Pineda Cardona, allegedly admitted that he entered the former president's room and saw Palacios and three others.

Cardona allegedly indicated that he left Palacios and the others in the room and returned moments later to find Moise dead.

The alleged assassin told investigators he was ordered to take two suitcases filled with cash and several documents.

Moise was found with gunshot wounds all over his body, several broken limbs and signs that he was tortured, the report said.

But there are indications that some of the key findings in the report were not included in the latest extradition request dispatched to Jamaican authorities.

According to Llewellyn, her Haitian counterparts did not provide identification evidence by witnesses or circumstantial evidence to suggest that Palacios was part of the plot “whether primarily, as a participant, or secondarily as an accomplice, accessory before, during or after the fact”.

“The evidentiary material supplied did not specifically implicate the subject, that is Mr Palacios, in the commission of the offences for which extradition is being sought,” she insisted.

Other glaring omissions, Llewellyn said, include a statement outlining the facts of the case; and the arrest warrant that accompanied the request indicated that Palacios was wanted for attempted armed robbery.

“The evidentiary material supplied by the Republic of Haiti was insufficient, at the very least, to ask the court to issue a provisional arrest warrant [for Palacios],” the DPP stated.