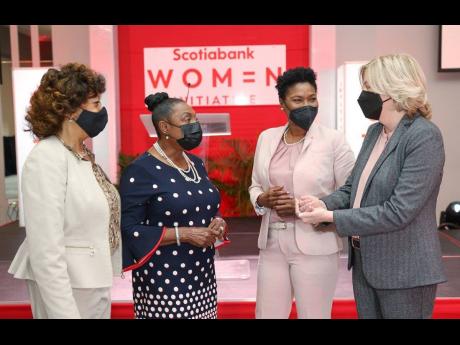 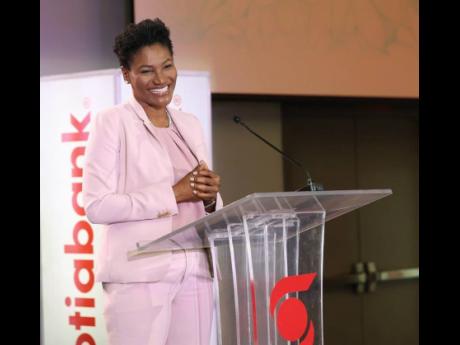 Contributed
Audrey Tugwell Henry, president and CEO , Scotia Group Jamaica, smiles as she officially announced details of the Scotiabank Women Initiative® during the launch on January 7.
1
2

Scotia Group Jamaica Limited officially launched the Scotiabank Women Initiative (SWI) on Friday, in an effort to break down barriers of inequity and marginalisation of women in the business sector.

The programme, which began in Canada in 2018 with more than 5,000 participants, has now been expanded overseas, with its first launch commencing in Jamaica.

Scotiabank is a multinational banking and financial services corporation with headquarters in Toronto, Ontario, Canada.

With 132 years of operations in Jamaica, the bank’s goal is to boost the economic prospects for women-led and women-owned enterprises to thrive.

The group has committed a $3-billion loan fund for businesses over a three-year period.

The loan fund will provide up to $100 million in funding to eligible women-owned and women-led companies at a base rate of seven per cent, as well as waivers on applicable fees.

Furthermore, costs for merchant services and business online banking will be waived for three months for these businesses.

The SWI initiative will take a three-pronged approach in providing financial education, access to capital and business-related training services and mentorship for women.

Audrey Tugwell Henry, president and chief executive officer of the Scotia Group, said that International Labour Organization (ILO) data revealed that nearly 60 per cent of managers in Jamaica were women. She said that while this report appears to be positive, the drawback is that only a small percentage of women advance to the level of chief operating officers.

The ILO report indicated that women-led businesses in the Caribbean and Latin America were more likely to fail owing to bankruptcy.

“While all entrepreneurs experience challenges in starting businesses, women have been found to have additional obstacles to overcome. One of the key issues that have been identified as a reason for failure is the lack of adequate funding,” she said.

It is because of this that the Scotia Group has made preparations to address this problem for small and medium-size enterprises owned and operated by women in Jamaica.

“We are committed to Jamaica and to offering strong financial support and economic recovery ... today we are taking steps to address critical statistics that will help to correct the under representation of women where it matters most,” said Tugwell Henry.

She said that this timely initiative would address some of the inequalities that women face and was a powerful move that would help women to unlock their greatest potentials.

“We truly believe that by elevating women in business and supporting diversity in leadership, we will also directly impact and benefit Jamaica’s economic development and our overall productivity,” she said.

Milverton Reynolds, managing director of the Development Bank of Jamaica (DBJ), hailed the bank’s initiative. He said that the programme coincides with the vision and mandate of the DBJ and has created a strong bond between the companies.

“Over the years, the DBJ has focused on filling market gaps in keeping with our mission of providing economic opportunities for all Jamaicans,” he said, while adding that the DBJ has successfully done this through providing low-cost funding for Jamaican citizens.

He said that female-led businesses and female entrepreneurs were critical stakeholders and recipients of the DBJ’s initiatives in micro, small, and medium-size enterprises.

Reynolds noted that under the DBJ’s microfinance funding programme, 72 per cent of loans have gone to women-owned businesses. Women have also obtained 33 per cent of the loans disbursed through the various DBJ-approved financial institutions, and have made up 40 per cent of those who have benefited from technical assistance and capacity-building programmes.

“This demonstrates that the DBJ’s programmes are inclusive and that our women-led businesses are able to access them to grow,” he said.

Anya Schnoor, executive vice-president of Scotiabank Caribbean, Central America, and Uruguay, stated: “We want to make it possible for women to dream big, that’s really what it’s all about.”

“I believe that SWI in Jamaica is gonna bring great opportunities,” she added.