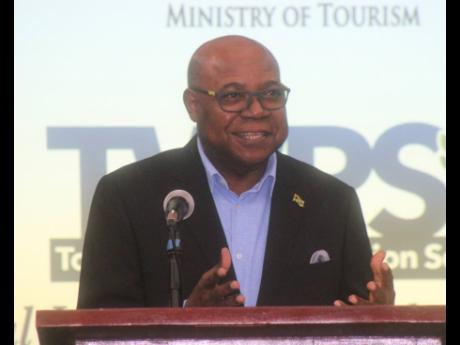 Fourteen years in the making, some 250,000 tourism workers now have access to a $1-billion Government-funded pension scheme.

Launched at the Montego Bay Convention Centre on Wednesday morning, the Tourism Workers Pension Scheme (TWPS) will provide a safety net for permanent, contract, or self-employed workers, who will be required to contribute three per cent of their salaries for the first two years.

Those who are employed will have their contributions matched by their employers in the second year of the scheme, while all contributors will start paying five per cent towards the scheme as of year three.

Red cap porters, rafts men, craft merchants and artisans, taxi operators, bartenders, waitresses, room attendants, and self-employed suppliers to the tourism industry are among the groups eligible to join the scheme said to have the potential to become the single largest in the country.

“This is more than just a game-changer. It is, in fact, a life-changer as it gives our tourism workers something to look forward to that will supplement their savings going into the twilight years of their life,” Tourism Minister Edmund Bartlett said, expressing his joy at realising a project on which he and Permanent Secretary Jennifer Griffith had worked for so long.

Like other Jamaicans, many tourism workers often fall on hard times without a pension after retirement.

As such, Robin Russell, general manager of Deja Resorts, is hoping that the TWPS will create some stability in the market, where persons can look at tourism as a more long-term option.

“We have always looked at tourism as transitional, but with things like this, we really hope that people can look at it as a career,” he stated.

The TWPS is being managed and executed by Guardian Group and Sagicor Life. The fund will be managed by a trustee, headed by banker Ryan Parkes.

Tourism stakeholders have the initiative as a great step into the future, with Iberostar’s Philip Hofer stating that this was actually treating the sector with the importance it deserves.

As managing director of 1,600 staff, Hofer added that tourism would always be the carrying engine for Jamaica. He has confidence in the scheme’s survival, owing to the fact that even if workers change jobs from one resort to another, their plan goes with them.

Some hospitality companies have for years implemented their own plans for staff, but Jamaica Hotel and Tourist Association President Clifton Reader noted that there were too many past tourism workers now in the winter of their days without a financial blanket.

Reader wants a policy dictating “that once you’re joining a company as a new employee, you should be registered on the pension plan”.

Bartlett confirmed that the Government had remitted more than half of the $1 billion committed to the fund and was in the third tranche. He emphasised that this was in order to provide another unique feature of the pension scheme, that of creating an augmented group – people who would have been 59 years old and would only have a maximum of five years contribution to their 65th birthday when the pension eligibility would kick in.