‘We want to feel safe’ 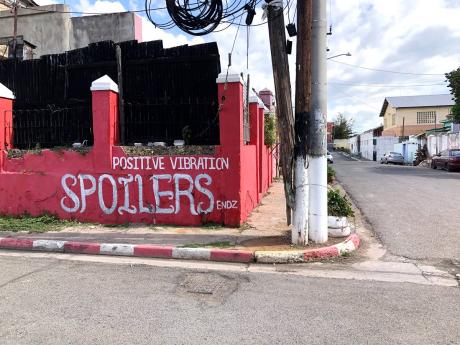 Photo by Andre Williams
Residents of Rose Gardens, also known as Spoilers, have welcomed the calm brought by the zone of special operations to the area, although they wished their community had fallen within the boundaries of the initiative. 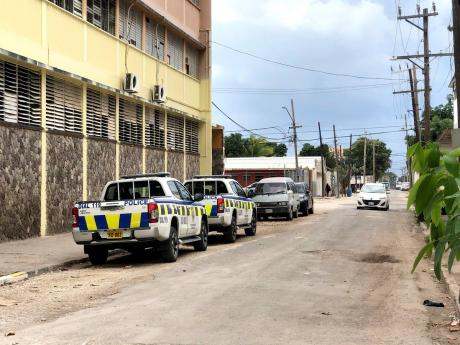 Photo by Andre Williams
Sitting in their parked service vehicles along Beeston Street at the corner of Rum Lane on Tuesday, police officers keep a close watch on a section of Kingston Central, which was declared a zone of special operations this week.
1
2

Worried that her boys could be sucked into the cycle of violence plaguing the area, a Kingston Central mother has expressed a willingness to share her Wi-Fi password with cops to accommodate a security post at her Sutton Street gate.

The mother had sent away her two sons – one in his early 20s and the other a teen – from the violence-plagued area, noting that by mere association, they could fall victim to the bloody feud that claimed more than 70 lives last year.

“Mi wouldn’t mind dem (security forces) up ya so,” the woman, who lives on the outskirts of a zone of special operations (ZOSO) encompassing Parade Gardens, said, wishing it had also included Rose Gardens, also known as Spoilers.

“One of the time dem come up a mi gate and mi seh, ‘I wonder if dem police ya want mi Wi-Fi [password] fi nuh move. Mi willing fi give dem fi nuh move from the spot,” she told The Gleaner.

Had it not been for the resumption of face-to-face classes, her sons would have stayed away from the area, the concerned mom said.

“Mi fraid fi dem. One of the time when it get hot, me did affi send dem go weh, but tru one of dem haffi go school, him come back,” she related. “Everybody know wah gwaan still, but mi try fi keep dem weh ‘cause if yuh go certain part or talk to certain people, you inna problem.”

She noted that the atmosphere has been more calm since the ZOSO was declared nearby on Sunday, and she can now freely sit at her gate to enjoy the peace.

Over on Wildman Street, close to where 10-year-old Jezariah Tyrell was killed on December 30, a group of children aged 13 to 14 told The Gleaner that they were wishing for an end to the violence.

While they were happy that the ZOSO was declared nearby, they, too, wish that it had been expanded to include a greater portion of their community.

“We want to feel safe. Nobody don’t know who to trust. [Any] car that driving through, yuh just can’t drop yuh guard,” one of the teens said.

An elderly man also told our news team that he would love to see lasting peace in the area, noting that he was uneasy about the number of strange persons moving into the area in recent times.

“I live here 40 years, and a pure strange face man me see bout di place. I just move and go do what I must do and go back inside. Too much strange face up here,” the senuor citizen said.

It was a similar cry on Beeston Street and Rum Lane as residents also wished they had been placed within the boundary of the security measure.

“We want it everywhere. I live here (Rum Lane) from Haile Selassie come to Jamaica 1966 ... . All the war and killing, nothing like that never happen on Rum Lane until last year dem kill a guy, a stranger ... [and] come back again Christmas Day and kill a next guy ... . Dem supm deh never use to gwaan,” the woman said.

The bloodletting has caused her sleepless nights.

“Anywhere dem want to drop the ZOSO dem drop it ‘cause every striking weh is the same thing. Dem boy ya gwaan too bad man. ... A so dem just a kill, kill, kill. Dem can’t stop? Why? Nobody don’t know,” she lamented.

James Street residents said that they would frequently see men walking through the area with high-powered weapons.

“Mi feel safer with the ZOSO, but put it up here. ... You can hardly tun out a street. You afffi live and fret,” one resident summed it up.

Imani Duncan Price, the People’s National Party’s standard-bearer in Kingston Central, has long advocated for a ZOSO in the area to tackle the high level of violence.

“Excellent start with ZOSO in parade gardens PM @andrewholnessJM and team. I spent this last year advocating for ZOSO due to continued horrific violence. Will advocate for ZOSO to expand to Rose Gardens (Spoilers, Mid-Town) – 5 of 9 murders Christmas week #CentralKingston,” she tweeted on Sunday.

Fuelled by a feud between two main gangs in the division since last year, Kingston Central recorded 79 murders in 2021 – a 55 per cent increase when compared to 2020 and the second-highest increase in murders across all police divisions.

Additionally, Parade Gardens, which accounted for 16 of those deadly attacks, is currently ranked among the top 10 communities with the highest level of homicides across Jamaica.