Cops foil hundreds of attempts at murder each year

Commissioner of police comments on stark reality of crime in Ja 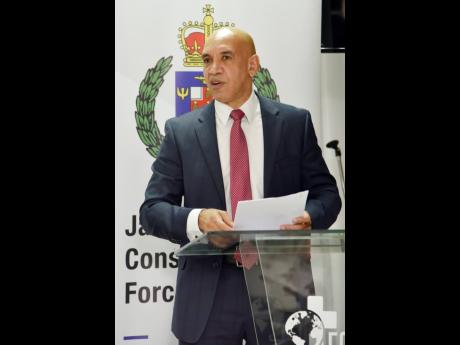 Jamaica’s already frightening murder figures of more than 1,400 last year could have skyrocketed closer to 2,000 had it not been for the efforts of the police in intercepting nearly 400 attempts at committing homicides, head of the Jamaica...

Jamaica’s already frightening murder figures of more than 1,400 last year could have skyrocketed closer to 2,000 had it not been for the efforts of the police in intercepting nearly 400 attempts at committing homicides, head of the Jamaica Constabulary Force Major General Antony Anderson has disclosed.

In a Gleaner interview on Friday, Anderson said investigators within the force are not able to be as efficient as is necessary due to the high volume of murders unfolding daily and, as a result, are focused on thwarting homicides.

“That is just our reality. So what we have to do, our technique is to make sure that we have [fewer] murders. So through intelligence, we interrupt about 300-plus attempted murders a year. Every year, three to 400 murders are interrupted – high threes to low fours every year,” said Anderson.

On the flip side, the commissioner of police said for the murders that are committed, the police face an uphill task of securing evidence for conviction.

He said while the intelligence network of the force is “widespread”, the difficulty rests with turning intelligence into evidence.

This, he said, requires forensics and first-person affidavit, the latter increasingly critical to the country’s legal system. But gangs continue to intimidate and silence those capable of aiding lawmen.

He said the strategy now rests with displacing these gangsters, ridding them of the means and support.

“Make no mistake about it. The reason why these guys are behind bars, the reason we know who to go for is because of intelligence. The evidential bit is a little more challenging. Just the sheer volume creates a little difficulty for our detectives,” the top cop said.

Pointing to a five-to-one ratio in terms of investigators to a murder case in other jurisdictions, Anderson said the reality for local investigators is in stark contrast.

In one instance, Anderson said a corporal from St James had amassed 26 murder cases in 2017, the year Jamaica had recorded more than 1,600 murders, though he had managed to clear up 50 per cent.

“He is a high performer. The challenge is if you get a case today, tomorrow you get another case. You can’t be efficient or as efficient as you would like,” said Anderson.

The commissioner said, too, that the police are contending with criminal elements that have migrated and are heavy players in murder-for-hire deals.

He told The Gleaner that several of the more than 60 murders committed since the start of the year are as a result of hire though a significant number is gang-related.

“On the surface of it may look like a robbery but it is not because nothing is taken … when you see that sort of thing if you can’t find the grudge immediately there is some reason why somebody has hired somebody else to do this,” he said, adding that 92 per cent of the killings this year are gun-related.

He said criminals have been able to democratise gun ownership through money acquired through illicit activities.

“That is why it is critical that the man with the illegal firearm goes away for a long time because you have no other purpose for an illegal firearm than to kill somebody,” said Anderson.