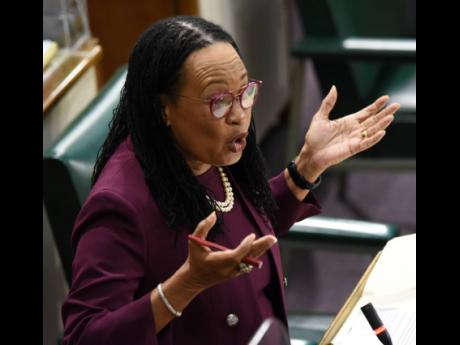 Ian Allen
Senator Donna Scott-Mottley makes her contribution to the State of the Nation Debate in the Upper House on Friday.

Opposition Senator Donna Scott-Mottley on Friday renewed the call for the identities of persons listed on the Sex Offenders Registry and the crimes for which they were convicted to be made public, citing the case of disgraced deceased pastor Kevin Smith, in arguing her point.

Scott-Mottley’s comments came during her presentation to the State of the Nation Debate in the Senate on Friday.

The senator questioned the hard-line stance of the Jamaican authorities in refusing to change the law to allow the public greater access to this list in light of what transpires in other jurisdictions, such as the United States of America where in some states the information, which can be accessed online, includes the name and picture of the offenders, along with a full breakdown of the crimes for which they were convicted.

In Trinidad and Tobago that information is also made public and can be accessed via a website. In urging for Jamaica to follow suit, in the interest of protecting vulnerable persons, especially children, Scott-Mottley, who is an attorney-at-law, asked that the situation be treated with the seriousness it deserves.

“So, if they have exhausted all their rights to appeal. So you know it’s a solid conviction. I think we should be able to know that that person is a convicted sex offender and protect our children – both girls and boys.

“If it had been known Kevin Smith was a convicted sex offender at the age of 27, would the history of that church in Montego Bay be different? The fact of the matter is that we don’t know if there are pastors, schoolteachers, persons in positions of authority, persons who are interacting with little children, who have been convicted,” the senator argued.

The risk in keeping knowledge of the sex registry restricted , according to Scott-Mottley, is that anyone living next door to a serial rapist or serial child molester and who has young children would not be aware of the need to take special precautions.

In that case, the children could be at serious risk, she argued.

“So I am calling on the government, let us look at it.”