Central Kingston ZOSO to kick up a gear 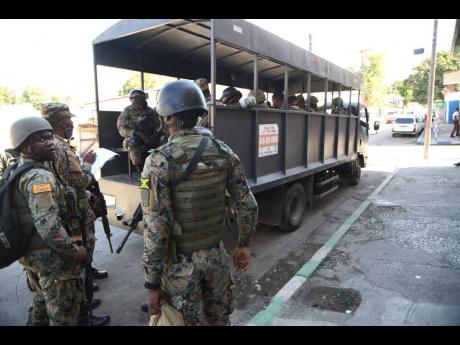 Rudolph Brown/Photographer
Jamaica Defence Force soldiers gather during a military operation at the intersection of Barry and Gold streets in central Kingston on Monday. Violence has flared in that section of the capital, with a zone of special operations imposed in Parade Gardens nine days ago. The island recorded 72 murders in the first 15 days of 2022.

Pledging a sustained effort to save lives and restore law and order, National Security Minister Dr Horace Chang said the Government will be ramping up forces over the next two months in the zone of special operations (ZOSO) imposed in Parade Gardens, central Kingston.

The deputy prime minister told Parliament on Tuesday that the decision to activate the ZOSO came with the assessment that social-intervention programmes had negligible return on investment.

On the contrary, it was the alarming levels of violent crime that prompted the Government to move in boots on the ground, the national security minister said.

“Without question, the level of violence in this community of approximately 3,000 residents is having a significant impact on the state of being of the residents, and children in particular. Having lost 16 lives in 2021 at the hands of criminals, Parade Gardens is among the top 10 communities nationally with the highest number of murders.

Chang said that the driving factors were well known: gang warfare, possession of illegal firearms, and the inability to resolve conflicts peacefully. Socio-economic and urban decay have, over time, contributed to the deficit in community development which ranked Parade Gardens “among the most vulnerable in Jamaica,” he added.

Residents were told to expect intensified security operations and increased community engagement by security personnel. Those measures, working in tandem, are believed to be key to strengthening local partnerships and ridding the area of violence producers.

Chang said further that the Government’s action was informed by a baseline study in June 2020 that showed that Parade Gardens shares demographic characteristics associated with other volatile communities in the country.

“Having just over half of the population (51.3 per cent) aged 30 and younger places this community at a high-risk factor. This, based on the fact that children, our boys in particular, are among the most vulnerable because they are targeted for gang recruitment. High levels of unemployment and low educational attainment have further stifled economic and social advancement of many residents,” Chang said.

However, the security minister charged that the status quo diverged from residents’ preferred state, with householders reportedly express frustration over, and fatigue at, living in fear.

“The Government is implementing the measures required to restore peace and good order to Parade Gardens,” said Chang.