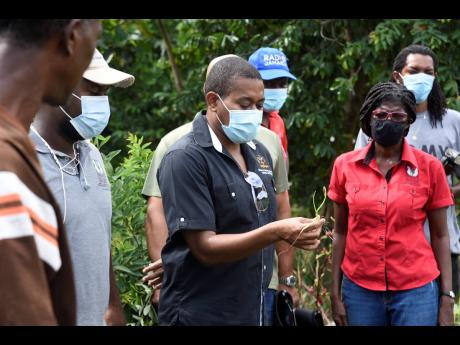 File
Then Agriculture Minister Floyd Green (centre) inspects crops during a tour of flood-ravaged farms in Albion, St Thomas, on November 13, 2020. Green said Tuesday that farmers who sign up to NIDS would allow for state authorities to locate farmers and track programmes.

Farmers are being courted for registration in the National Identification System (NIDS), the one-stop database through which the Holness administration aims to formalise thousands of Jamaicans who are off the grid.

That intervention is expected to ease the challenges the Ministry of Agriculture faces in locating young farmers, pinpointing those in need of assistance, and tracking initiatives.

That declaration was made on Tuesday by newly minted Minister without Portfolio Floyd Green, who has been tasked with overseeing the roll-out of NIDS from the Office of the Prime Minister.

Green, member of parliament of St Elizabeth South West, which is part of the agricultural belt of the Breadbasket Parish, said he would drive the mandate to enlist as many farmers as possible to build out credible records for planning.

“Unfortunately, we’re still unable to adequately and accurately identify our people, so you know I would have to transition to say that as we look to make youth as the drivers for food security, we have to be able to identify those youth in a way, in a form that is verifiable, that is safe and is efficient,” Green said during an address at a Rotary Club of St Andrew virtual meeting on Tuesday.

Many of Jamaica’s hundreds of thousands of farmers are unbanked and live on the margins of the country’s formal systems.

Green, who resigned his position as minister of agriculture in September 2021 after a celebration faux pas during a coronavirus lockdown, had, in that role, embarked on partnerships that sought to woo farmers and fishers from the fringes with health, life and general insurance policies from at least four insurers.

Though tied with the inducement of benefits, the insurance initiative offered a template for the sign-up of masses of farmers in formal arrangements that could be assessed and monitored.

Lenworth Fulton, president of the Jamaica Agricultural Society (JAS), told The Gleaner on Tuesday that Rural Agricultural Development Authority data show that there are about 220,000-240,000 registered farmers in the island. But official data do not capture an estimated 60,000 seasonal farmers who represent about a fifth of the industry’s workforce.

He is backing the roll-out of NIDS and is willing to use the JAS as a platform for its promotion. But he urges the Holness Government that “the messaging has to be correct”. That includes a public-relations campaign that NIDS is not geared towards the policing of their pockets, a concern he acknowledges weighs on the minds of farming interests.

“It has to say to them it’s not a taxation or punitive thing and can help in the fight against praedial larceny,” said Fulton, referencing the estimated $6-billion annual hit farmers take from thieves.

He also warns against NIDS being spun for political gain, insisting that farmers would sign up if they were convinced they could reap health benefits or tap recovery funding in natural disasters.

“If they know there is a system, both in good times and bad times, with proper messaging, it could be done,” he said of marketing NIDS.

Nearly 30 months after an initial draft bill was rejected as unlawful by the Constitutional Court, new legislation was unanimously approved in 2021.

Green also said on Tuesday that he expected newly appointed Minister of Agriculture and Fisheries Pearnel Charles Jr to build on his legacy.

“What I’m very confident about is that Minister Charles will continue on some of these wonderful initiatives that are engaging our youth, that are ensuring that we focus on the things we need to be food secure and to infuse technology, and I’m also confident he will bring his own vision to how we can sustainably transform agriculture to really have youth as the driver of our food security,” Green said.